For years I have dreamt of taking Calvin to the movies, but our son won't watch television or videos. They don't hold his attention and he can't sit still very long anyway. There have been countless dreary days with nothing to do when I'd have given my left eye to take him to a movie. But Calvin can be loud as hell and quite distracting. So when my friend told me of a special children's performance of Pinocchio, lasting only one hour, I called up the Maine State Music Theater box office. After explaining our circumstance, we were gifted the tickets.

The house was packed. Little kids with their parents and grandparents filed into the auditorium. I must admit I was nervous and, regrettably, my anxiety seeped out in the impatient way I treated a couple of ushers when navigating the way to our seats, which were at the back of the main floor in a special row reserved for wheelchairs.

When the lights went down Calvin turned his attention to the neon exit sign, but then seemed to settle on the stage. The audience's cheering and clapping didn't seem to faze him at all. To keep him otherwise occupied, throughout the performance I fed him blueberries, grapes and pieces of chicken sausage. At times he shook his head back and forth manically, flailing his arms, then he began to vocalize. Thankfully, his intermittent grunts and howls were not loud enough to warrant removing ourselves from the show.

To my surprise, Calvin made it to the finale. I considered it a major feat for us both—my crazy kid and I venturing so far out of our comfort zones.

As the crowd dispersed, two women sitting next to us remarked on how well he did. One of them, Linda, told me that at times during the show Calvin patted her shoulder. As we waited to make our way down the aisle to the exit, the other woman, Marcia, asked me if I thought Calvin understood the play. I told her, no, going on to explain that though he does seem to understand some language, he probably doesn't comprehend conversation.

"He doesn't seem to grasp abstract things, like birthdays," I told them.

I went on to mention how surprised I was, shocked really, to have been so emotionally affected by a fable I've known since childhood. As the parent of a disabled, chronically ill son, the notion of a floppy puppet—one who can't walk or talk, and who has wooden legs resembling my Calvin's spindly ones—becoming a real boy proved painful for me.

"I want that for Calvin," I told the women, tears welling up in my eyes.

Marcia opened her arms widely and pulled me in. Linda offered the same gesture. I felt the warmth of their hearts in the long embraces they gave me. I told them I had had a similar shock when I had gone to see the theater's production of Young Frankenstien years ago, when The Wretch breathed life, then sat up from the slab, groaned and took his first awkward steps. In Frankenstein's Monster, as in Pinocchio, I saw my little boy. 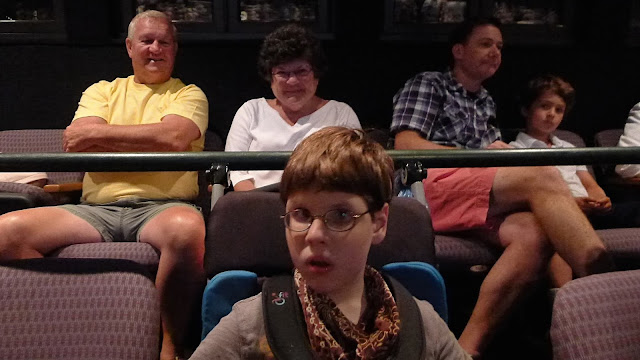 Posted by Christy Shake at 9:01 PM