Late last week, Calvin matched one of his personal bests having not had any grand mal seizures in a month's time after having suffered six to eight per month since April. The longest Calvin has gone between seizures is seventy-eight days. That was five years ago when he was taking high doses of three powerful antiepileptic drugs—Keppra, Onfi and Banzel—before I began giving him a homemade THCA cannabis oil, and before starting a four-year wean from Onfi. On the downside, this month he has had ever slightly more partial complex seizures than of late, but—only a handful—they have been mild and brief.

Nowadays, Calvin is taking a fairly high dose of Keppra, but we have not increased it in two years or so. Moreover, his daily dose of THCA cannabis oil hasn't increased for years. In late June he began a low dose of a new CBD cannabis oil called Palmetto Harmony, to which I attribute the virtual disappearance of Calvin's grand mal seizures.

For the most part, since initiating the Palmetto Harmony, Calvin has been sleeping better and, besides a few brief manic episodes on most days, our boy seems happy, is smiling and giggling and hugging. His improved behavior and compliancy means it has been easier to take him places; he willingly walks farther and has gotten slightly better at sitting still. My guess is this improvement is also due to the CBD oil and/or the reduction in his seizure activity.

For those of you wondering why CBD seems to be helping Calvin now when it hadn't seemed to help during the years he was on a couple of different ones, I think it may come down to the way Palmetto Harmony is made; it is infused directly into the oil rather than being extracted using ethanol or CO2 methods. In this way, the oil captures the broadest, deepest spectrum of cannabinoids and terpenes from the cannabis strains its makers use. In other words, nothing is lost.

So, we've entered Calvin's second month with zero grand mals on the books. It is an amazing feeling of liberation, and I have hope that we can make the partial seizures go away. 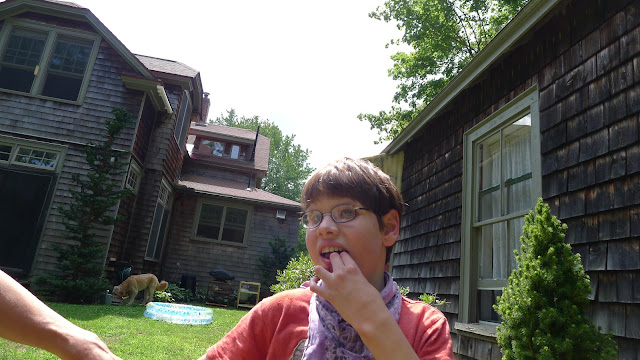 Posted by Christy Shake at 9:16 AM