Good riddance to March and its six grand mals, its baker's dozen of complex partial seizures, its night terror-pain episode and its eighteen days of at least one kind of misery for my boy. Good riddance to dirty snow, icy sidewalks, frozen tundra and frequent sub-freezing temperatures.

A little over a week ago on the heels of a terrible spate of seizures, we reduced Calvin's CBD oil having seen no positive results from having increased it almost two weeks prior. We took it from 145 milligrams down to 60 per day—a dose he was on when he had half as many seizures as he did this month. I did not do a total reboot (taking it away for two days then starting back at its lowest effective dose) since Michael was out of town and I didn't want to do anything drastic while he was away. Since I reduced it, however, we have not seen any complex partial seizures, but it is still too soon to come to any conclusions about the lower dose's overall efficacy. Suffice to say we're hopeful, and if Calvin does have fewer complex partial seizures, it would be consistent with what we saw when he was taking a different brand of CBD oil over a year ago, which was that, at least at high doses, it seemed to trigger complex partial seizures.

So—once again—cross your fingers and knock on wood for our sweet little guinea pig, who endures the suffering seizures bring, and the side effects of the methods we use to thwart them. Hopefully one day we can say good riddance to them, too. 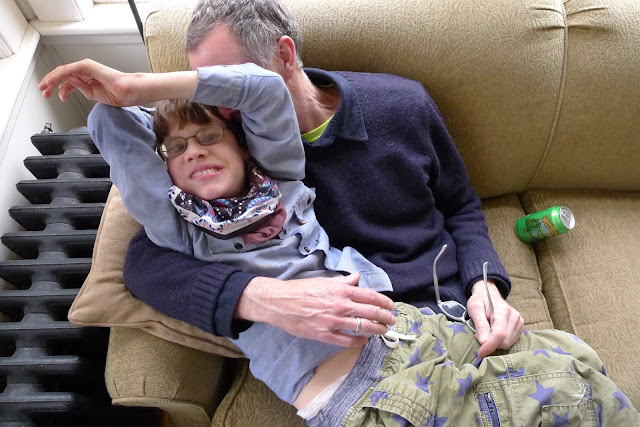 Posted by Christy Shake at 2:22 PM