After a twelve-day stint in which Calvin suffered several suspicious events (possible seizures), two grand mal seizures, at least eight partial complex seizures and a two-hour pain/night-terror episode, I decided to increase his Palmetto Harmony CBD oil by nearly thirty percent. My gut and logic agreed that doing so was not very risky, and might serve to thwart some of Calvin's seizures.

Yesterday morning, after his newly increased morning dose, Calvin rebounded well after a grand mal and even went to school. After last night's increased dose, he slept soundly until about two-thirty, when he started getting restless. I laid him back down and covered him several times, but he kept sitting up. Finally, I switched on the light and was able to determine that his diaper was soaking, so I got him out of bed, changed his diaper and took his temp since he felt kind of warm. While doing this, he did not seem seizure-ish at all, and when I laid him back in bed he fell right back to sleep.

When Calvin woke up this morning at six, he seemed pretty good. I did not notice any suspicious behavior, no signs of partial complex seizures such as funny breathing, rapid heartbeat, grumbling tummy, pale skin, panning eyes, fingers in his mouth, or clammy hands. He seemed "normal" for the first morning in nearly two weeks!

This lack of seizure activity in the wake of a grand mal, and having significantly increased his CBD oil is promising. It tells me that the CBD oil is likely not the culprit in Calvin's recent uptick in seizures, though I need more evidence to be convinced. In any case, Calvin had a good night. And though I was awake for almost two hours dreaming of spring, of San Francisco, and worrying about my child, I ended up having a good night, too. 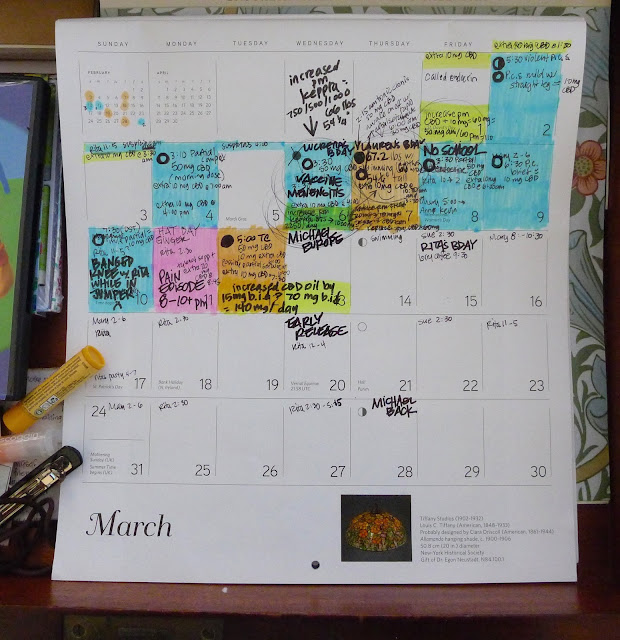