out on the ice

The ice on the pond is still two to three feet thick. Pickup trucks park on it. Folks speed snowmobiles and ATVs across its expanse. Fishermen, like my husband, drill holes in it from which to fish.

Thirty-five degrees and no wind to speak of, yesterday was mild. A glorious sun came out from behind the clouds at times. Calvin's kick-ass nurse, Rita, watched Calvin for several hours so I could get out of the house. Michael and I drove twenty miles, then trudged through deep snow to meet our friend Macauley who had set up shop in the middle of Pleasant Pond, which would be considered a lake where I come from. Almost immediately, we began catching fish from eight-inch holes: yellow perch, white perch, crappie, pumpkinseed. Michael caught a hog: an eighteen-inch small mouth bass. It flopped on the ice for awhile—its gaping mouth seeming to indicate its suffocation—until we realized it was too big and small to keep. Michael dropped it back into the hole, watched it float sideways, tail up, before it caught its breath in the frigid water then swam into the shadows.

A few hundred yards from us, a rowdy group had set up a tent and were manning several ice holes. The young men were roughhousing with the giggling kids, picking them up, shoving them and tossing them around. Their happy banter skipped across the snow. Though I was glad to have been unshackled from Calvin for an afternoon, I lamented his absence and all the reasons that made it so—his fragility, his chronic illness, his inability to walk in snow boots, to play and keep warm, his incessant staring at the sun, his incapability to understand what might really be going on.

After nearly three hours on the lake, my feet started getting cold, so we said so long to Macauley, who would spend the next several hours there catching more fish, watching the sun set, and then taking a long walk out on the icy lake after dark. I told him how luxurious that sounded, then I imagined myself—in another life—doing so. 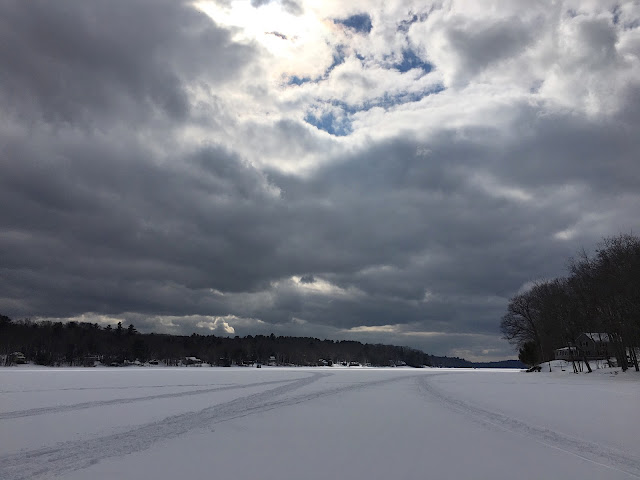 Posted by Christy Shake at 8:43 PM