To look at my son is to think he is on death's door. Listless. Wan. Dark circles under his eyes. Sleeping with lids half open. Seizures three nights in a row. Two of them grand mals. A focal seizure an hour past midnight. His lips and fingers turn blue. It scares me. Because of the double grand mals and the earliness of this one, I make a rare move to give him Diastat—rectal Valium. It works to stop the cluster.

In bed next to him, his breathing nearly imperceptible because of the benzodiazepine, I worry: What if he were to get Covid-19? I think about the vaccine. I resent the fact that our governor switched to an aged-based rollout. The rationale is that age is among the strongest predictors of hospitalization and death from Covid. But under a certain age, that argument doesn't pass muster.

In some states, landscapers and massage therapists became eligible for vaccines before people who, for instance, are immunocompromised. People with chronic conditions like Calvin are three times more likely to get severe illness or die from Covid than others. And yet they are neglected, as if they are somehow undeserving, unworthy. I think about the anti-maskers who cling to their myth of rugged individualism and bootstrap theory, insisting we should all be personally responsible for avoiding illness (as if we aren't already doing everything possible with that singular goal in mind.) Meanwhile, they parade their maskless faces in stores and restaurants, recklessly endangering workers and patrons because of some twisted notion of freedom. No man is an island, especially during a viral pandemic. Everyone needs to do their part to suppress its spread. Don't we drive on the right side of the road to keep ourselves and each other safe from harm? Does wearing seatbelts mean we're "sheeple"? Why are some Americans so unwilling to embrace even the smallest gesture to help keep their neighbor and community safe from harm? The conceit and sense of entitlement is stunning.

I understand that an age-based rollout is more efficient and will get everyone vaccinated in a shorter period of time, but that doesn't negate the sense that some lives are seen as more expendable than others. You can't debate your way around it; an age-based rollout means healthy thirty-, forty- or fifty-year-olds will get vaccinated well before younger people with type-1 diabetes, cystic fibrosis, cancer or neurological disorders. At the current vaccination rate in Maine, Calvin won't get his until July. In the meantime, he'll likely remain at home with me, unable to attend school or come with me to the grocery store without risking exposure. In other words, for families like ours, there's still a very long road ahead. 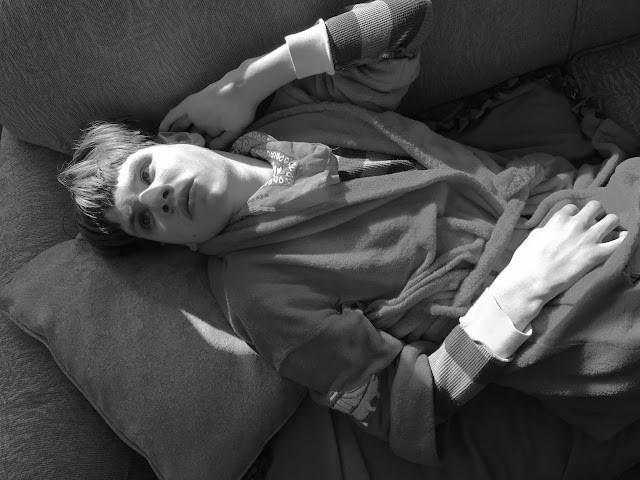 Posted by Christy Shake at 2:42 PM