Regrettably, we will be spending most of today on the green couch or upstairs in bed. Calvin is recovering from suffering grand mal seizures on the last two consecutive nights. As in recent episodes, they happened just after bedtime. In their wake, he often experiences several hours of panic-like symptoms: rapid, pounding heartbeat, chills, trembling, clammy hands, gastrointestinal distress, and perseveration in the form of repeated eye-pressing, patting and pounding his mattress, bed panel, and the wall behind it. I do my best to soothe him by rubbing and patting his back, embracing him when he wants, keeping him covered, and preventing him from careening out of bed. In the middle of the night, I change his diaper if it is wet. Last night, because he was shivering, I took his temp. I give him his morning medicines early to prevent subsequent, pre-dawn seizures. On these kinds of nights, more so than most, I don't get much sleep.

This is the third week in a row in which Calvin was hit with grand mals on two consecutive days. These double whammies are becoming increasingly common of late. Seizures, like some living organisms, seem to seek out patterns and paths of least resistance. Seizures are known to happen with greater frequency in moments of lighter sleep, which is right before waking and just after falling asleep. Clusters of seizures are especially troublesome because they are difficult to control and it is hard to know when to intervene with the use of extra maintenance drugs, the use of emergency medication or seeking emergency care. We have learned the hard way—through nightmarish experiences—to avoid, at nearly any cost, going to the hospital. Instead, we do what we can at home attempting to contain the seizures without the use of benzodiazepines, an effort which requires me to trust my gut. This morning, after weighing options, I gave Calvin an extra tablet of his one pharmaceutical, Keppra, to see if it might alleviate his panickiness and prevent further seizures. Thankfully, it did. And though he's hopefully on the mend, he may not be out of the woods yet. 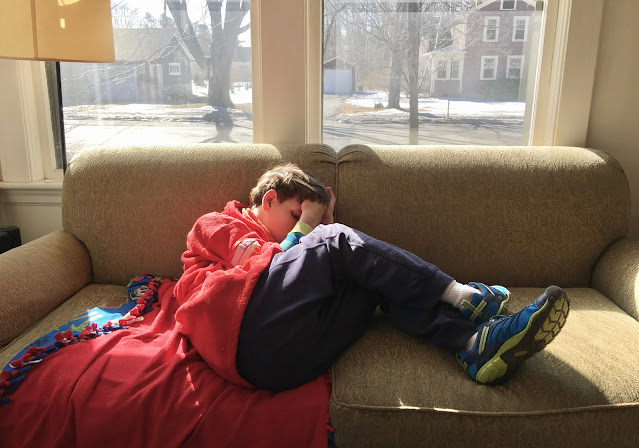