At noon yesterday I was on the phone with my sister-mama after having finally gotten Calvin downstairs. He was recovering from the morning's back-to-back seizures—two of three grand mals in the space of just two days. She had read about our troubles—Calvin's seizures and my tweaked back—in my morning blog post and had called to check in on me. As we chatted, Calvin seemed at peace in his jumper, a place of comfort for a boy who suffers from an antiepileptic-induced movement disorder; the kid can't sit still even if he wanted to. My best guess is that he wants to.

While refilling Calvin's sippy-cup, I looked over my shoulder to see him slumped in his jumper, his dangling hands and face red as beets. Rushing to him, I called out his name, asking in vain if he was okay.

"He's having a seizure!" I yelled into the kitchen where I'd dropped the phone on the butcher block. "Grand mal!" I added, before I heard my friend quickly and compassionately end the call.

The first part of a grand mal, aka tonic-clonic, is the phase where the body contracts and stiffens as if in active rigor mortis. There was no way I was going to be able to pry my boy out of his rig, his body like a clam closing its shell. Instead, I pulled a wooden chair up and under him and set him in my lap. Just then he went into the seizure's tonic phase; this is when the body convulses. To reduce the tension from the jumper in case its straps might hurt him, and to get him on his side to prevent him from aspirating on sputum, blood or vomit, I reclined some, lifting up my legs and planting my feet on the nearby partition. There, in my lap still strapped into his jumper, my five-foot tall, eighty-five pound son convulsed for more than a minute.

When the fit was over, I slid his flaccid body out of its trappings, taking care not to knock his floppy head on the floor, then I untangled his feet from the crotch of the jumper. In the filtered light I could see his face and hands had become ashen. To stop the cluster of seizures from advancing—Calvin's history of bad clusters has led to hospitalization for stubborn seizures as long as 45 minutes—I grabbed a vial of Diastat (rectal Valium) that we keep inside a little bench Michael built. I popped off the plastic top, opened a packet of lube, squirted some on its tip, pulled down his pants, undid his diaper, inserted the tip of the vial, depressed its plunger which squeezed the gel right into him. Then, I changed his wet diaper, spread his fleece baby blanket under his body and folded a flannel one under his head as he drifted into benzodiazepine oblivion.

I called Michael to tell him what had happened. He was concerned, particularly considering that since we started Calvin on a homemade THCA cannabis oil seven years ago, Calvin virtually never has grand mals in the daytime anymore, especially if he is awake. What's worse is that I don't remember Calvin ever having three grand mals in less than twelve hours.

It's impossible to know the culprit that caused four grand mals in the space of two-and-a-half days. Neither of us is exposed to others who might pass on illness. Calvin has not had a vaccine yet. Could it be too much antiepileptic medication? Not enough? A growth spurt? Hormones? The "natural" progression of epilepsy? After seventeen days without a grand mal and fifteen days without any seizures, was he just pent up? Seizures beget seizures; as with all paths, well-worn ones in the brain are easier for seizures to take.

When Calvin awoke, I eventually managed to get him to the green couch with a little bit of feeble help from him. He spent the rest of the day and night recovering, and still is. I'm grateful if not amazed that my body was able to do what it did, considering I was practically paralyzed with back pain the night before and yesterday morning. I guess it goes to show what we can do when we're in rescue mode for our kids. 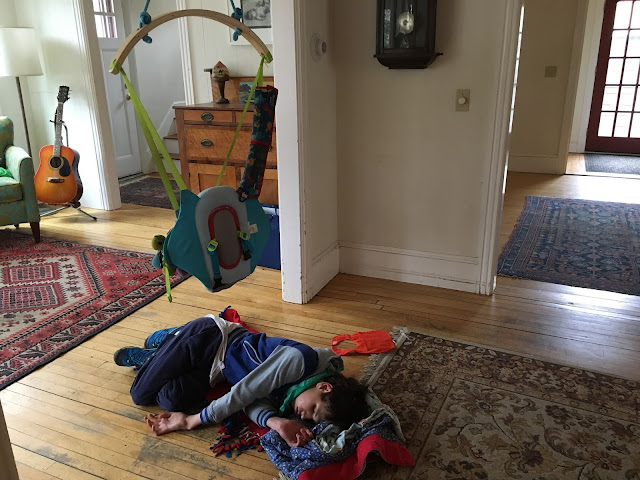