Deep in dream comes the whistle of a train. It's one of few sounds—plus wind chimes, foghorns and rain—that I don't mind waking to, even at four o'clock in the morning. The well-composed symphony of notes, the crescendo, the low rumble and roll of steel wheels on burnished tracks soothes me. I imagine myself in one of the cars headed somewhere—almost anywhere—peering out the windows at countryside, cityscape or coast. I drift back to sleep again until five or six when I must get up to give Calvin his seizure meds. In this house, sleeping in is not a thing.

Earlier, I saved another stink bug, at least I think so. She'd been lingering inside the upstairs bathroom for too long. Like me, she'd been traipsing in circles. I cupped her in my hand and opened the window, tossed her out hoping she'd fly away like the last one. But she was in no shape, and fell to the ground like a pebble. Perhaps she's tough and survived the fall. I'd like to think so.

Milder weather is coming in dribs and drabs. I walk Smellie past Woody's old house thinking that soon it might be the kind of evening we'd be sitting on his porch drinking whiskey together. Last spring we were visiting each other from opposite sides of a window. By june he was gone. I miss him so.

Mark and Kathy peddle past on their tandem smiling and calling my name. Kathy blows me a kiss. I blow one back to her. Turning my head toward the glare of a sinking sun I see Jill a few houses down standing in her driveway waving both hands at me. I return the favor. At the crosswalk Nan slows, turns then stops. She rolls down her window. Behind my mask, I crouch down to see her better. She says she's eager to get working in her garden. Her perennials are likely the most beautiful in town. I tell her I miss seeing her. In maine's window between late spring and early fall, we often stand in her yard—one she's tended for probably sixty years—regarding the iris and lilies, zinnias, geraniums and dahlias. She seems to know all the botanical names of her many varieties. Every year she gives me a bunch of poppy seeds and a clump or two of something I covet for my own garden. I try to return the favor, but what I have to offer pales in comparison.

Calvin is on his thirteenth day with no grand mals. We rarely see focal seizures anymore, though they're not completely gone. He's changing, growing like crazy. He's doing better on the potty and beginning to wash his hands with a bit less help. His balance is better, his walking more sure. I've begun to peel myself away from him for brief moments in the house and yard. It didn't used to be that way. For seventeen years I've had to always be within arm's reach of him. The weaning gives me tiny windows of freedom. Still, I yearn for so much more. 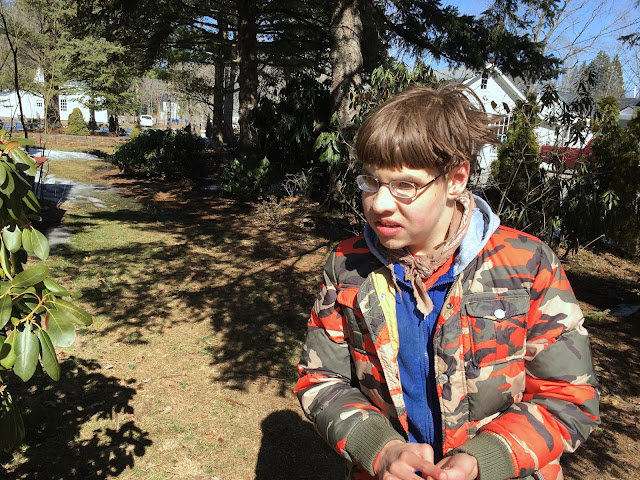 Posted by Christy Shake at 9:22 AM