One of the side effects of the anti-seizure drug that Calvin takes is respiratory suppression. He already suffers from global hypotonia, or simply put, low muscle tone. This neurologically based condition affects his entire body, not just his extremities and trunk, but also his gastrointestinal track and his respiratory muscles. And because Calvin cannot walk unassisted, much less run around and get aerobic exercise, his lungs aren’t “worked out”, which puts him at greater risk for respiratory viruses and infections.

So, when Calvin gets a cold virus, especially since he began taking this drug, I lose sleep. The other night he was awake for over an hour congested and coughing up mucous. My great fear is that he will contract pneumonia and end up in the emergency room as he has on several occasions in the past.

Influenza is another great concern for our family. In 2009 thirty-six children died in this country from influenza A—H1N1. Of those children 67% had one or more high risk medical condition and of those, 92% had neurodevelopmental conditions, like Calvin. So every year all three of us get vaccinated no matter what.

I have a friend whose son was born with serious neurological deficits of unknown origin. Regrettably, I never had the pleasure of meeting the boy but she told me that, though he could not do many things including speak, he was a very gentle spirit—a bright star—and made an indelible impression on everyone he encountered. Her son was pretty much confined to a bed or a wheelchair. He too suffered from epilepsy and low muscle tone and was very susceptible to frequent bouts of pneumonia. At the tender age of fourteen my friend's son lost that battle.

So, when it's cold and flu season I tend to worry a lot. 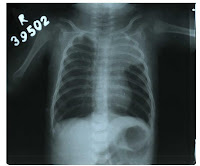