I have a love-hate relationship with the grocery store. It used to be a place that I dreaded for all of its glowing mothers toting healthy bouncing babies. Over the years, however, the staff has made our acquaintance and regularly shows great kindness and concern for our family.

Lately, and for reasons that are unclear but are likely seizure or drug related, Calvin has taken to manic behavior the moment I put him in the grocery store cart. Yesterday proved to be no exception.

Upon entering the store I bumped into an acquaintance—someone who has serially ignored Calvin as if he didn’t exist—and this time was no exception. Small talk ensued, I asked how he was and he said, "oh, one step in front of the other." His comment struck me as some kind of tragic irony; he was describing exactly what I was urging Calvin to do, albeit against great stubbornness and refusal.

Mostly unruffled, we moved on to the produce department where Calvin began his usual antics which had everyone gawking. Somehow we made it successfully through the deli, the meat department, the dairy department and finally to the checkout lane, all the while disturbing the peace. By that time I had taken Calvin out of the cart and propped him on my hip—which is no easy task—in hopes of stopping his incessant screaming. Holding my 38 pound kid, who doesn’t hold on to me, and with only one hand free, I fumbled clumsily with the groceries. The plastic package of blueberries sprang open and they spilled all over the floor. Of course, I had chosen the express lane.

In order to finish paying I had to put Calvin back in the cart where he resumed his manic howling. One nice associate asked if he was okay and I told her I thought a seizure might be brewing. All screeching aside, she commented on how cute he was and stroked his thick hair as the other associate replaced my package of blueberries.

Thoroughly dejected and while exiting the store a middle-aged man walked past, glanced at my shrieking son out of the corner of his eye and remarked clearly, “wow.” As he walked away I replied within earshot—in my best Valley Girl accent—“whatever.”

By this point I was frazzled and nearly in tears but I successfully regained composure and pat myself on the back, for Calvin has given me the strength of an Amazonian woman, the patience of Job and the composure of a Buddhist Monk—at least sometimes. 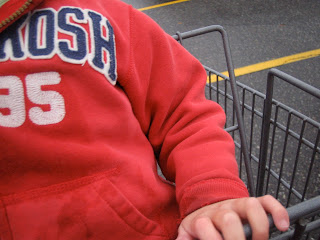