Contrary to popular belief, epilepsy is not a benign disorder where you take a pill and everything is hunky-dory. Most people who are lucky enough to have their seizures controlled by one medicine—or often as many as two or three—suffer unpleasant, sometimes debilitating, side effects.

One of the most heinous consequences about Calvin’s intractable epilepsy—when the seizures are not controlled with treatment—is its impact on his development.

Calvin’s development has always been slow like molasses. It took him months before he could hold his head up. He couldn’t roll over from one side to the other until he was over a year. At fifteen months he was just beginning to drink from a bottle—as long as we held it for him—and he wasn’t able to get into a sitting position on the floor until he was a year and a half, and at that, it was an arduous task.

Just before Calvin turned two he started chewing food safely, trying finger foods and reaching for objects with more purpose. His visual tracking was improving though remained limited and delayed. Around his second birthday, after countless hours spent practicing on our hands and knees, he could crawl a few feet. But then came the seizures and with them came the drugs.

Within the first six months after his epilepsy diagnosis Calvin’s development continued to plod along at a snail’s pace, but progress was evident nonetheless. He took his first steps when he was nearly two and a half but his balance was such that he looked like a novice on a tightrope. Spills were frequent and since his protective reflexes were practically absent we remained at his side—as we do today—to prevent injury. But the seizures increased and so, concomitantly, did the drugs.

Whenever we initiate a new antiepileptic drug (AED) or increase the dose of an existing one, Calvin goes berserk for four or five solid days. He screams and whines terribly but then, worst of all, he looses acquired skills. Just when he had learned to pull himself up into a stand we changed his meds and he lost it. He used to answer our simple questions with a quick, affirmative inhalation, akin to the way some French say “oui”, but we were forced to alter his meds again and that wonderful expression vanished.

A few months before Calvin’s third birthday I was convinced he’d be walking by himself at any moment. That dream has never materialized though I practice with him like a coach drills her athletes, and for hours every day.

By the time Calvin was almost four he had progressed to crawling up the stairs, with help from us. He was gaining some strength and coordination and had begun to engage with his world. Then, however, we initiated the Ketogenic diet, and while his three seizure drug doses remained the same, the diet altered his metabolism and his AED blood levels jumped as much as thirty percent. Unfortunately, the seizures stood their ground. Calvin, on the other hand, did not. He fell into a kind of stupor. His bright eyes became lackluster, dead orbs, he hardly smiled and he no longer had the desire, strength or ability to crawl up the stairs.

While on the diet for over two years his development essentially plateaued. Nearly three years later Calvin is doing little more than he did when he was four, though a radical change in his medication has lessened his seizures and significantly modifying the diet has brought back our happy, smiling boy.

It is difficult to know what exactly is causing Calvin's increasingly protracted development—if this inertia is because of his deficient brain, the scourge of the seizures, the drug side effects or, most likely, some dreadful combination of all three. However, no matter how you slice it—and in the unlikely event he'll outgrow the disorder—the seizures and the drugs continue to be ghastly offenders and risks to our little boy's life. We need to find a cure.

Please continue to share Calvin's story with your friends. Help bring us one step closer to a cure. Like Calvin, just do it one step at a time. 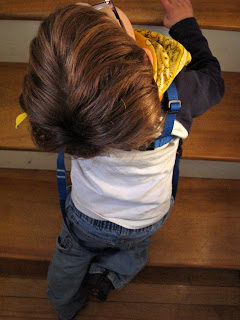