Sometimes I’m so very tired. And when I’m tired I get pretty dang grumpy. And when I’m grumpy it’s best to steer clear. Luckily the “grumpies” mostly get me in the mornings after I’ve been awake all night because Calvin’s been awake all night. So really, one only needs to worry if one is my husband or Rudy the dog. Fortunately, everyone else will most assuredly be able to avoid me when I am not, what one might call, a pretty sight.

When I’ve got the grumpies, and though they’re short-lived, I can get mean and nasty. I wouldn’t be surprised—if I got a glimpse of myself—to see knotty hair sticking out in clumps, narrowed beady eyes with dark, puffy circles under them, trembling flared nostrils and perhaps yellow fangs protruding from foaming lips.

When I get teed off I just need about five minutes to vent my frustrations in some quiet part of the house. This way I can sputter and spew a continuous string of my most creative and raunchy expressions that to one, in another part of the house, might sound like repeatedly screaming “supercalifragilisticexpialidocious!” Though my manner of expletives are not meant for the faint of heart and would most certainly cause Mary Poppins—in mid ditty—to run for cover.

Indeed, I enjoy employing all of George Carlin’s “seven words you can never say on television,” plus about thirty-five more that are nasty variations on the themes “dirt-bag”, “dog-breath” and “poopy-face” oft peppered by my most favored and cherished F-bomb.

I highly recommend, when one gets the grumpies, considering this mode of release. It ranks much higher in my book than suffering tendinitis of the elbow from thumping a pillow too hard. It’s also a lot more rewarding, and often ends in a chuckle or two because, honestly, it’s better if I don’t take myself too seriously when the grumpies get the best of me. 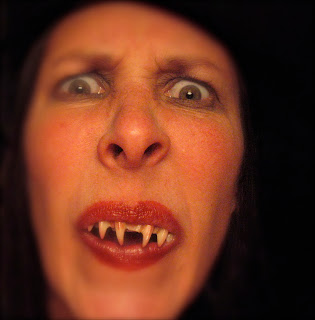