What they say is true; old habits die hard. Over the years Calvin has developed a myriad of habits, bad ones, irritating ones and a few innocuous ones.

Currently, his worst compulsion is eye poking. We think it is a self-stimulating mannerism. He pokes both eyes— though thankfully not his corneas—whenever he is idle, such as sitting in the high chair while we prepare his meals, in the car seat or the stroller. He pokes his left eye with his middle finger while sucking his thumb and he pokes his right eye with his index finger. If he can manage it, and try as he may, he will poke both at once. We fear he will damage his eyes or detach a retina, so we have harmless methods to prevent this habit as much as possible in his waking hours. But at night when there is no defense, we know where his fingers will go—nestled right up against his eyeballs. Soon we'll be putting him into goggles.

Calvin’s habits take months, sometimes years, to break. He used to bang his hands and head on every window, which was unnerving because our house has some very old panes, but we successfully curbed this behavior after a couple of years of trying. He still bites pretty much anything he can get his hands on so we are still working on that one. There was a time—during which we think he was experiencing gastrointestinal stress—when he pulled his hair out at night, in clumps, and when he pulled my hair out in clumps, too.

Basically, curbing any of Calvin's habits has very simply required us telling him—over and over and over—a bazillion times, like a broken record, not to do it: "don't poke your eye, Calvin," "put your hand down, Calvin," "sit down in the bath, Calvin," "don't bite that, Calvin." It's a very good thing that I have learned to embrace tedium, because sometimes it actually works. 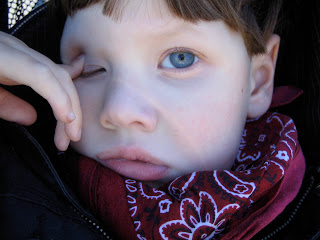