just enough to be dangerous

My husband and I have always wanted to live a simple life. We wanted just one child to care for, to nurture, to teach and to love. But soon after Calvin was born, it was clear that life would not be that simple. We began learning how profoundly disabled he would be and as our dreams of parenthood started to shatter, I found myself questioning our initial plan.

Although Calvin has always mesmerized me with his beauty and charm it has been difficult to—and nearly impossible not to—compare him with other children. It amazes and shocks me to see tiny infants in grocery carts and strollers gazing at me from afar, and I find myself fascinating at their fine dexterity. Imagining other kids walking, of their own volition, side by side with their parents and asking things like why the sky is blue, weighs heavily on my heart. Often, when walking the dog I used avoid the playground near our home because seeing the children running and laughing and playing sent me into despair.

I still ask myself, "why can’t Michael and I have a chance at all of these dreams?" Sometimes I ache for it to be so. But then, I remember the reality of our situation.

Calvin, almost seven, has remained a toddler since he first started trying to walk over four years ago and, therefore, his capabilities are just enough to be dangerous. Because of his poor balance, coordination and vision he requires our constant vigil. And since he is so tall a toddler, and does not have refined protective reflexes, when he falls, he falls hard, like a tree that's been cut off at the ground. If he could walk by himself, without tripping or running into things, everything would be much easier.  Conversely, if he were confined to a wheelchair, which—though I'd love him just as much—I am thankful he is not, I wonder if I might say the same. But he’s neither here nor there, which complicates things; when I am with Calvin the chores go undone, I cannot cook, read or write. It's hands-on one hundred percent of the time unless he's in his high chair or johnny-jump-up. Fortunately we have the help of a nurse several hours a week.

I believe it's because of our time and devotion to Calvin that he has made significant strides considering his substantial impediments. I'm not sure if he would have come as far as he has unless I spent years doing things like getting down on all fours helping him learn how to crawl. He has our full attention, which has helped open up a world of possibility to him that he otherwise may not have had access to. I certainly can’t feel sorry for myself that I have had that to give. If Calvin weren't an only child he might still be lying on his back, helpless. Instead, he's become just enough to be dangerous, which is alright with me. 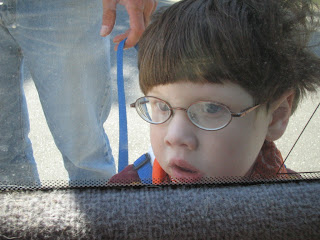