Everything changed the moment we found out that there was something terribly wrong with our unborn child’s brain. At that point we decided we wanted to find out everything about him so we learned that he was a boy and we named him Calvin, the only name we ever truly loved.

Two good friends, wives of Michael’s colleagues at the college, were due to have their babies close to Calvin’s original due date. Our three boys would go to the college day care, have the same friends and grow up together as neighbors. Instead, complications developed and Calvin was born six weeks early with little to no fanfare amidst much worry and uncertainty.

Our friends’ sons were born a month and a half later in our local hospital. Calvin and I had been boarding in that very labor and delivery ward for several weeks while he perfected nursing. One boy was born just down the hall from our room and the other in the room next door. We all went home with our infant sons within days of each other.

Months passed but Calvin never entered the daycare with the two boys, nor did he become their friend, nor any child’s friend for that matter.

I remember what must have been their second birthday party. Several gleeful children from the college daycare were there with their parents. Shiny Mylar balloons floated aimlessly around the room. The table was adorned with pretty cupcakes and colorful sippy-cups filled with juice. Cute gift bags stuffed with sundries and toys were strewn onto the floor and, excitedly, the children rummaged through the goodies. In my arms, and while I stood off to the side, Calvin cried and cried. The other children were scampering around the room in cone-shaped hats and blowing out candles, some eating their cake with forks. My child couldn’t even sit by himself in a chair, couldn’t crawl, couldn’t hold a fork and didn’t seem to be aware of the things going on around him, though maybe his crying was in protest of the unfamiliar scene. In any case, there was no way of knowing, but he simply couldn’t deal, and as a result, neither could I. I wanted to dissolve into the wallpaper or hide behind the plants. Instead, I retreated upstairs so as not to cause a ruckus and in an effort to calm Calvin. Upstairs, I could hear the animated shrieks and happy commotion below. I hoped that the hubbub was loud enough so that the guests couldn’t hear my sobs.

A few moments later my friend, the hostess, found me and embraced me as I disintegrated. She didn’t let go until I did. I knew she could have no idea of the torment I was feeling but I could see the concern and worry in her face, which told me she might have known, to some extent, why. She helped us pack our things and quietly escorted us out, leaving the merrymaking behind.

My boy Calvin is oblivious to the meaning or tradition of birthdays. When he used to be able to eat sugar we'd make him a cupcake, stick candles in it and stand by for damage control. And though I always appreciate the occasional invitation, I usually take a pass on birthday parties, but perhaps someday that will change. 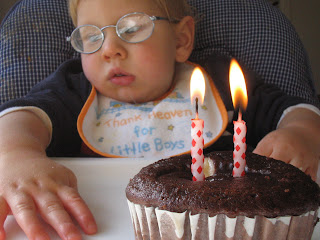