Though my son Calvin's seizures and the three powerful antiepileptic drugs he is taking seriously impede his development, he is making progress.

Today, Calvin traipsed down the sidewalk in front of our house to Woody's place three doors down, which is the farthest he's ever gone, and even then he's only done that a dozen or so times in his life. He's a homebody and a stubborn little bugger, but it seems that since we've reduced one of his seizure drugs slightly he's a bit more willing to step out of his comfort zone and amble down the block. This time I convinced him to walk past Woody's house then on to Mike's place and up the front steps to buzz the ringer. Mike, who is in his early nineties and was widowed a couple of weeks ago, wasn't home to receive us. If he were it probably would have been the first time he'd have seen Calvin walking.

On our way back home we were greeted partway by a gimpy Rudy the dog who had, for the most part, stayed in the yard awaiting our return. And to think Calvin did all of this walking a few hours after having given five full vials of blood for testing, during which, by the way, he was a total champ.

And when I tell Calvin, upon reaching the goals I set out for him, that mama is so proud of him, a big smile spreads across his face. Perhaps he, too, might know he's making progress, albeit by shades. 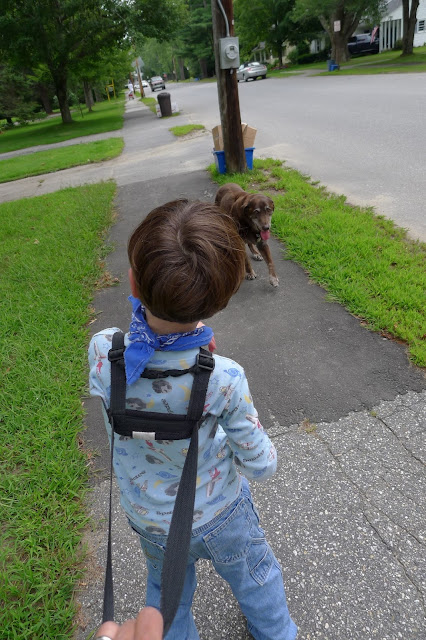 Posted by Christy Shake at 1:49 PM