while at the grocer

The boy sat squished in the front of the shopping cart, his little sister perusing the aisle. I pat my friend on the back and chuckled about the fact that the grocery store is the only place where we seem to encounter each other. His son asked, looking at Calvin who was traipsing around at the end of his harness, “Does he have a disease?” I explained that, yes, Calvin does have some sort of disease, a disorder. My friend, the boy’s father, knowing of Calvin’s epilepsy and having contributed thousands of dollars for epilepsy research in Calvin’s name, asked on his son’s behalf, “What’s the name of the disease?”

“Epilepsy,” I replied, “Do you know what epilepsy is?”
“No,” the boy said.
“It’s when your brain doesn’t work quite right, and it sometimes has a kind of storm in it like thunder and lightening,” I tried to explain.
“Does it go away?” He asked.
“Sometimes it does and sometimes it doesn’t,” I answered, “We’re not sure, but we hope so.”
“Is that why he’s so pale?” and then quickly and conscientiously he added, “No offense to him!”
“I don’t think so, he just doesn’t get outside as much as some kids do,” I said, noting the handsome boy’s rosy cheeks and golden skin, and then I worried that perhaps the boy had noticed the pallor that often precedes a seizure.
"Does he have sleepovers?" he asked.
"No, he doesn't," I replied.
“You’re a very lucky boy,” his father interjected, “and you have a lot to be grateful for.”
“Those’re very good questions,” I told the boy, “very smart questions,” and I nodded approvingly to his father who had listened patiently and intently to our conversation.
“How old are you?” I asked, having forgotten the boy’s age.
“Eight,” he replied, and I realized he was just a year younger than Calvin, and I remembered seeing his mother when she was pregnant with him, back when Calvin was so fragile even before he began being racked with seizures, before having to take loads of dizzying, debilitating drugs.

We said our goodbyes and I finished my shopping with Calvin as he pushed the cart down the aisles better than I’d seen him do and with a most serious look of concentration on his face. I’ve seen some real progress with this skill in the past several months, since Calvin’s had slightly fewer seizures, since we’ve reduced—almost eliminated—one of his seizure drugs. And as we pushed the cart to the car, Calvin perked up and a little smile crept over his face, and I could see the pink in his cheeks and the sparkle in his eyes just behind the thick lenses of his glasses. 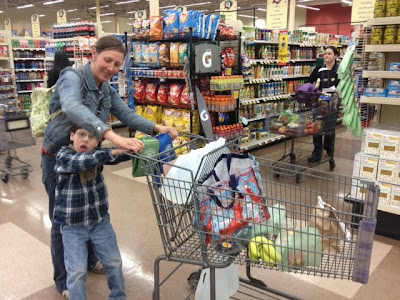 Posted by Christy Shake at 1:43 PM