Tattooed women in cut-offs and tank tops pushed fat babies in strollers. Scruffy men in t-shirts and sneakers trailed behind toting paper baskets full of fried clams and blooming onions. A young green-eyed Hispanic man working a midway ride looked on somberly then finally cracked a smile when he saw mine. He reminded me some of a boy I had a crush on in my youth.

Watching Michael weave through the crowd bridling Calvin with his harness, passing carneys with cigarettes and leathery skin between rows of shacks boasting fried dough, candied apples and hand-cut fries, made me think of carnivals of long past. I imagined the freak shows in which deformed people were paraded like animals in front of gawking crowds. I wondered if my legally-blind, disabled, non-verbal, spastic kid might’ve once drawn a crowd of voyeurs at this type of event. As it was, I felt the weight of eyes fall upon us, some curious, some compassionate, as Calvin staggered and stalled within Michael’s careful grip.

In the shade of the horse arena, while feeding Calvin a snack, we watched an eight-year-old boy steer a pony-drawn buggy to a third-place finish. The boy sat so upright and steady in his crisp blue shirt and vest under a cowboy hat almost too big for his head. I couldn’t help myself from weeping.

Every summer when we visit these agricultural fairs I wonder if, by the following summer, Calvin might be walking on his own, might be seizure free, might be off at least some of his drugs. And every summer is met with disappointment of the reality that Calvin hasn’t much changed. Other nine-year-olds there were likely milking cows or chasing pigs or brushing horses or riding bumper cars or eating cotton candy. Ours, who seemed oblivious to the animals and the rides and the games, was in a stroller filling his diaper.

The sun beat down on us as a cloud of hay dust flew into our eyes. It was as if the universe had tossed it at us in the same way it had when Calvin was born missing a significant portion of the white matter in his brain. I squinted and wiped away a sandy tear, and as we headed back to the car I looked up at the clouds in the sky, which thankfully took no notice of me, and hoped that next summer things might be better. 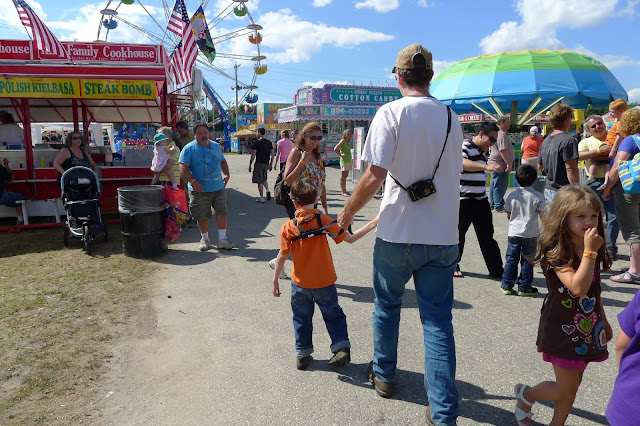