PH probes, along with EEGs, kick my butt, make me sick in the gut.

Our nine-year-old child suffered mildly from an un-lubed tube hosed straight up his nose—restrained by three of us—and into his esophagus. He sputtered and cried but within minutes he tried eating his breakfast, something that Michael and I had not, which got us both in foul moods for lack of food.

The day dragged on as we tagged along behind Calvin, who, as the probe's porter, toted the battery-powered recorder. The probe was masked to his face with membrane-thin tape. The sticky stuff went under his beak and across his cheek and again at the nape of his neck. He took little regard of the tube and adhesive except for a runny nose and some sneezes.

The recorder has buttons to push: one to mark eating and one for when he's done, one for when he is upright and one for when he is prone, one for when he coughs or writhes, all possible signs of reflux, the crux of this miserable trial. I slept with him in his bed to prevent said tube from entangling or strangling, or getting ripped out of his head. He kicked my gut and clocked me in the face and even in my tight embrace his flailing fists barely missed my eyes several times in the night. In the end, sleep was fleeting just trying to defend myself from my little friend's unconscious beating.

Finally, the probe came out, no doubt. Michael peeled off the tape, careful to keep Calvin's delicate skin in shape. Then at nine, having just doffed my robe, we fished out the probe, put the junk in a FedEx bag with its tag and sent it back for the doc to take stock of the gunk.

So, although the pH probe kicked my butt, Calvin's it did not. He's been a trooper (as well as a major pooper) like I had guessed he’d be. And so, now we sit for a spell and hope to hell for results showing that Calvin doesn’t have reflux, because—you know—that would add to a pile, that rises a mile, of everything else that already sucks. 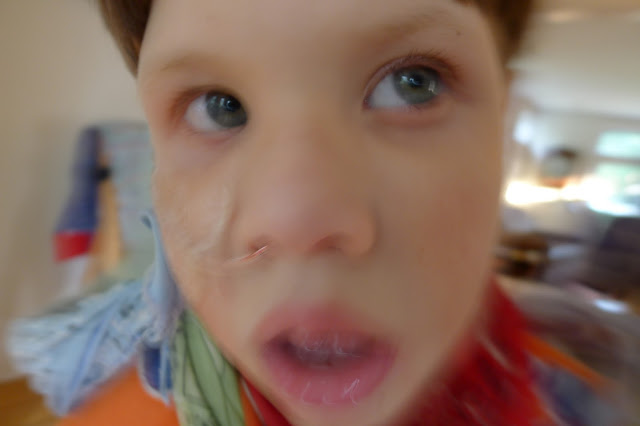