After a day of seizures, and before what would be another sleepless night, I went upstairs to say goodnight to Calvin. He was standing in his crib, like he does most nights, waiting for me after having been put to bed by Michael. I laid him back down, ran my fingers through his thick hair, told him he’s my best boy, that I love him and goodnight. I tickle his ears, so soft, pink and springy. I remember what they were like when he was born. He was a preemie—six weeks early—and the cartilage in his ears hadn’t formed yet. They laid delicate and flaccid against his head like wilted flowers.

Sometimes I marvel at what a beautiful child my boy is. A thick, silky, auburn mass—with strawberry highlights that catch the sun—has long since replaced the curly blond locks he had as a baby. His flawlessly smooth skin covers long slender limbs and a supple round belly. Are his large eyes still indigo? I think so, just not as deep as before. Such an amazingly perfect body begs the question, “what happened to his brain?” Why couldn’t he have been born with nine fingers and nine toes instead of missing much of the white matter in his brain? What went so wrong? And like so many questions, we don’t have the answer; it just is what it is.

But what Calvin lacks he makes up for in his gentle spirit, in his dimpled smile, in his adorable giggle, in the way he lovingly touches our faces and necks and in the way he kisses our nose. He’s our one and only remarkable boy and I don't know what I'd do without him. 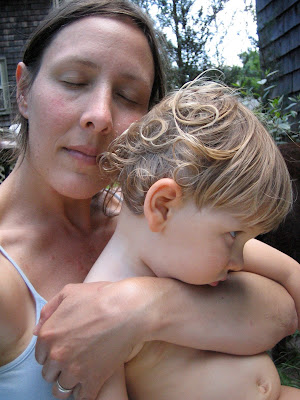