He said the little boy went to school one day. That day the boy had a seizure. The next day the boy realized that he had lost all of his friends.

I’ve heard it before, heard about the college student who suffered a five minute seizure face down on the sidewalk as people hurried past stepping over her convulsing body. No one came to her aid.

I heard about the man who had a seizure in the boardroom, his colleagues later laughing behind his back.

I heard about the teenager suffering from epilepsy and depression—a common combination—who refused to take her meds, suffered a seizure while driving, rolled the car with all of its passengers, survived to tell about it yet still doesn’t take her meds.

I heard about the boy whose seizures returned while at boarding school, whose teachers hadn’t informed his mother, whose mother let him go swimming during a visit home, who drown while having a seizure.

I heard about the woman who, when her daughter was diagnosed with epilepsy, lost all but a handful of people she thought were her friends.

I heard about the woman who broke her toes against a wall while seizing.

About the woman who fell down a flight of stairs during a seizure.

About the mother who lost her only son and the father who lost his daughter and the men who lost their young wives to Sudden Unexpected Death in Epilepsy.

I heard about the man who lives each day in the fog of his twenty-three seizure medications.

About the woman who told no one, for fifty years, that she had epilepsy for fear that she would face discrimination.

About the boy who drown while having a seizure in the bath.

About the child who went brain-dead during a prolonged seizure.

About the girl who went blind because of a serious reaction to an antiepileptic medication.

About the girl with epilepsy who, in fits of drug-induced rage, scratched her mother bloody.

About the parent who refused to tell anyone, even the teachers, that her child had epilepsy and what safety precautions to take if one occurred at school.

About the doctors who tell their patients that they have a seizure disorder but fail to tell them that it's the same thing as epilepsy and that the disorder can be fatal.

About the child with epilepsy who had the entire left side of his brain surgically removed.

About the boy who endured several dangerous induced comas in an effort to thwart near constant seizing.

About the children born healthy and vital then succumb to epilepsy, suffer hundreds and thousands of seizures, endure the wrath of scores of antiepileptic drugs and their side effects and fall into a state of serious mental deficit.

About the boy—my boy—who began having seizures at eighteen months, who has tried and failed nine anticonvulsant drugs and two dietary therapies, who cannot walk by himself, cannot utter a word, endures heinous drug side effects and still suffers the seizures.

I've heard it all before. So, now, have you. Go out and tell it to the world so we can find a cure and an end to all of this suffering.

Give to cure epilepsy: http://www.calvinscure.com 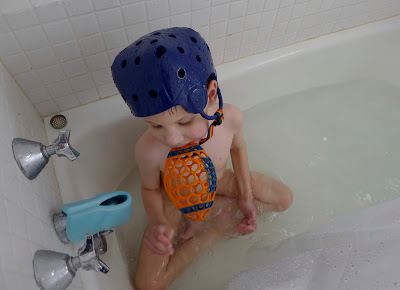