it’s all fun and games

I swear to god that kid is going to poke his eyes right out of his sockets—really, detach a retina, like the doc said—and shoot one right across the room and poke someone else’s eye out! Calvin just won’t leave those eyeballs alone. If he isn’t eating or walking or crawling around he is poking his eyes. And even then sometimes those fingers find there way in there.

Calvin is going to be lucky if his two front teeth stay in his head past his seventh or eighth birthday. He pulls his foot up to his mouth and, before we can intervene, he bites his shoe and then yanks his foot out from between his clenched teeth. But, if those chompers don’t survive his wrath, we’ll still manage somehow. Besides, I've always been a sucker for a snaggletooth (think Sam Shephard.)

I’m surprised Calvin hasn’t mangled more eyeglasses than he has because he yanks them sideways off of his head. And to add insult to injury, if he can get them off before I pounce on him, he bites, chews and rips them out of his teeth. Thank goodness for Superglue and electrician's tape. It's Revenge of the Nerds 2010. Good thing I love nerds.

It’s a miracle Calvin hasn’t had to go to the podiatrist the way he bangs his heels on the tile floor in the bathroom and cracks them against the hard wooden footrest of his high chair and smacks them on the bottom of the cast iron bathtub when the water has drained out. Thankfully we don’t have downstairs neighbors.

If I didn’t brush Calvin’s hair once in a while he’d have dreads by now, at least in the front. At night in his crib he pulls his knees up under his body and rubs his forehead back and forth, back and forth until his bangs are a frizzy mass. It wouldn't surprise me to wake up one morning to find our own little Rastaman.

And if it were possible to rub off your fingerprints he would have done that by now, too. Some call it pill-rolling—the way he rubs his fingertips together incessantly. At times the habit is practically ceaseless and it's a wonder he doesn't spark a flame. But I guess there are worse habits to worry about.

So for now, it’s all fun and games—until Calvin pokes an eye out. 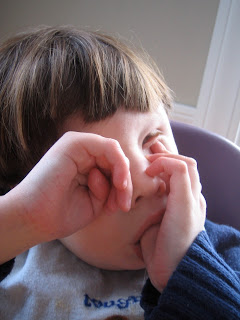