At night when I hear Calvin rustle I go to him. I want to be sure he is not having a seizure and that he is breathing well. If he’s awake he rolls onto his back and looks up into the darkness expectantly, aware of my presence. I know this means he wants a drink of water. I gently lift his head and give him the bottle that I keep at his bedside. The medicine makes him thirsty. When he’s had enough he rolls to his side and falls back into a slumber as he softly repeats “uh-uh, uh-uh."

In the darkness I fill up his bottle and I can see out the bathroom window. On clear, crisp nights, like last night, Orion appears in the sky. He looks down upon our house majestically, with his taught belt and steely sword, his celestial body strong and resplendent. Orion is the hunter. I imagine him watching over Calvin and slaughtering the beasts we know as seizures. Orion’s battle is not won, but every night when I see his gleaming features in our ebony sky my hope is renewed. 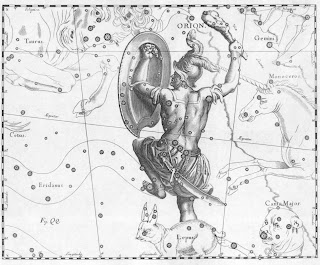