My six year old son is legally blind—times five—and he suffers both ocular and cerebral visual impairments besides the epilepsy and other developmental delays.

As a preemie Calvin’s eyes appeared large and inky like a shark’s. It was clear that he really wasn’t seeing us until one day, when he was about four months old, I was cradling him in my arms as he was crying. That moment—looking down at him—was the first time he locked gaze with me as tears welled up and cascaded down our cheeks.

My husband, who is a professional photographer, had a theory. While crying, Calvin squinted which might, he said, produce the effect of a small aperture bringing objects into focus. He also thought it possible that Calvin’s tears acted as lenses, and it was his opinion that—under those circumstances—Calvin was seeing me.

Hastily, we took him to an ophthalmologist. Over the next several months at each of three checkups we expressed our great concern about Calvin’s vision and the impact that might have on his development. The doctor responded to us, each time with a hideous bedside manner, saying that while Calvin’s vision was poor it wasn’t bad enough to warrant glasses. We stopped seeing that doc.

Soon after, a neuro-ophthalmologist in Boston informed us that Calvin’s acuity was 20/1000 (legally blind is considered to be 20/200) and that he likely had a cerebral impairment. He also suffered nystagmus, which is the constant jerking and roving movement of his eyes, as well as intermittent esotropic strabismus, or crossed eyes. Glasses were prescribed immediately. Calvin was just eleven months old.

What remains unclear about Calvin’s vision is not his acuity but, because of his cerebral visual impairment, the way his brain interprets the images he sees. At six and a half he is just beginning to show an awareness for obstacles on the ground that he must step over or around. His depth perception never developed and he is in constant danger of running into corners, misjudging distances and falling over our sleeping dog. The antiepileptic drugs exacerbate the problem. So, I hold on tightly to his harness in case he falls, and we practice walking around the house in unison most of the day.

What is clear is that Calvin's vision, albeit still poor, is improving. A successful eye surgery to correct his esotropia has helped a lot, and for that we are very thankful. Now if he would just stop poking his eyes, but that is another story. 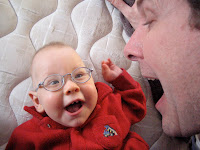 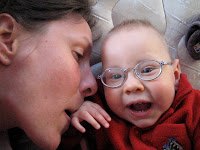 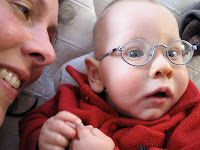 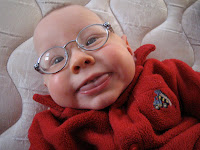 Posted by Christy Shake at 2:48 PM