I’ve felt a seizure coming on this entire week. In Boston last Monday the neurologist gave us the go-ahead to temporarily increase one of Calvin's anticonvulsant medicines for just a few days in an effort to stave off suspected seizures. The strategy seemed to work, that is, until last night.

All week long Calvin has been having manic episodes. Since bumping up his seizure medicine beginning Monday night his crazy behavior has escalated, but we were unsure if it was a result of the added dose or a reasonable hint of a looming fit.

Yesterday Calvin’s nurse noted his excellent balance on the back deck steps, needing little to no help going up while not even holding onto the railing. “Hmmmm,” I murmured with a bittersweet air, semi-enjoying the improvement in his skill while knowing it likely meant a seizure on the brink.

As I baked a rare batch of cookies the nurse gave Calvin his bath. He immediately began laughing hysterically. At moments I shuddered at the raving, demented cackles that tumbled down the stairs. As soon as the cookies came out I went up to relieve her for the day. We noted a faint mark on Calvin's back and suspected it was a mild hickey I’d inadvertently given him earlier, though not his first one. “He’s so kissable and ticklish on his back,” I remarked. She knowingly chuckled.

We reviewed the day as Calvin splashed excitedly then said our goodbyes. As she headed down the stairs I admired the new tattoo on her ankle. I quickly turned round to see my boy cross-legged, folded in half forward with his face submerged in the water before him. Then he tensed and let out a strident shriek like air squeaking out the stretched neck of a balloon. “Here it is!” I yelled and the nurse raced back up the stairs. I plucked Calvin out of the bath. He appeared like a corpse with rigor mortis and felt like a wooden stool. He was awkward to carry in this shape, his frame contorted in a grotesquely crooked arch. With his long stiffened body I minded the door jams as I whisked him to our bed.

The nurse and I lightly covered him in towels and spoke loving words to him. We told him it was almost over. “My sweet, sweet boy,” I whispered into his ear, smoothed his wet hair back from his face. He began taking gruesome, raspy breaths, but breaths nonetheless, though he was still in the heart of the storm. After several minutes he started coming out of it. She stayed with him until I had cut his pills, drawn up his potassium citrate and made a yogurt, oil and applesauce seizure meal. I propped him up on several pillows and I spooned in his medicine just before his eyes became leaden and he drifted off to sleep.

As I wrote this, perched in a chair pulled up alongside our bed, I watched him sleep, fearful of another seizure upon his waking. Michael, having just arrived home, put dinner together. The clang of pots and pans and light music drumming up through the floor consoled me. Through the wide open windows in our bedroom I heard the rain begin to fall as the white sky lit everything aglow in the dimming light of evening. We need the rain, I thought. It’s so dry outside—parched really—like the coarse gravel of a crow’s squawk, the harsh buzz of the cicada, or the loathsome sounds of my little boy’s seizures. 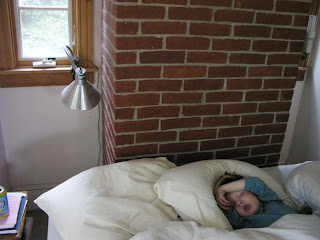