Two summers ago Calvin was having convulsive seizures every day or two. We were trying to wean him from one of his three antiepileptic medications that happened to be addictive, a relative of Valium. The wean caused him to have withdrawal seizures in addition to his reliable, epileptic seizures. He pretty much stopped eating and held his medicines in his mouth for up to ninety minutes before swallowing, as if he’d forgotten how. He lost five pounds in a matter of weeks.

So although we’re strictly limited from most of the activities we love and thus had hoped to enjoy as a family—bike riding, camping, boating, fishing, going out to breakfast or lunch, walking in the park, heading to the playground, picnicking, strolling to the ice cream stand, heading to the beach—I am pretty thankful that we are not living the nightmare that we were two years ago.

However, in the world of epilepsy, particularly uncontrolled epilepsy like Calvin's, I am reminded that nothing is guaranteed, that things can change for the very worst in an instant. And so I am grateful for—but don’t take for granted—the days when Calvin doesn’t have seizures and and I hold fast to the moments when he seems to be a happy-go-lucky little kid. 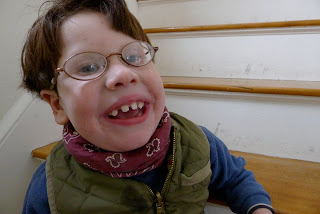