Often, especially when I look into Calvin’s pure blue eyes, I wonder what went wrong, what ruined him. Saying that doesn’t mean that I don’t love and cherish every little bone in his body, every tiny capillary, each feathery hair, all his millions of emerging cells, the very marrow of his bones. Even so, he’s not right—not healthy—and since he’s not we have to pump him full of chemicals every morning and every night in hopes they'll make him right. What a sick joke.

None of these so-called promising anticonvulsant drugs has stopped my little boy’s seizures. He’s been ravaged by them (the seizures and the drugs) since he was two years old. I'm constantly looking to find another way, perhaps a better way.

At lunch the other day, for the first time in over a year—maybe two—Calvin ate a vegetable. It’s not that he doesn’t like vegetables, it’s that I thought I saw a pattern of seizures occurring after he ate them as he subsequently suffered painful gas, which can also trigger seizures. Perhaps it was simply mere coincidence. But in recent months his muscle tone and digestion have improved. So the other day I gave him broccoli with his chicken, mayonnaise, yogurt and blueberries. He liked it ... a lot.

My hope is that we can boost his immune system, which when compromised by a virus or infection, lowers his seizure threshold. I aim to try whatever it takes to rid our son of his affliction. I’ll then try acupressure, acupuncture, hell, I'd even try voodoo if I trusted it in my gut and thought it could work. I'll just keep trying one thing at a time and perhaps some day we’ll hit the jackpot.

Best thing, though, would be to find Calvin a cure; to right this ruined kid who gets more and more wrecked with each seizure and with every bitter dose of pharmaceutical chemical soaking into his brain.

Please share Calvin's story with others. Help bring us one step closer to a cure for epilepsy. It's not hard. Just do it one story at a time. 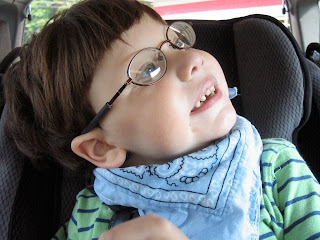