back to blue hill

I had to pinch myself when I woke up in Brooklin. It’s been over six years since we last visited this sleepy retreat in what’s called Downeast Maine. All the cabins have since been winterized with woodstoves and insulation and the old inn is being painted. A steep but sturdy staircase has replaced a nearly vertical path from bluff to beach. We’d carried Calvin down that embankment when he was just two years old. Later that night he had a seizure, we called 911 and ended up in the nearby Blue Hill hospital. And though it’s one of our most favorite places in the world we haven’t been back since ... until now, our tenth anniversary weekend.

During the night hard rain had soaked the earth. I sat drinking my coffee staring out the cottage windows wishing we could take Calvin and Rudy for a walk. But the long grass was drenched and Calvin doesn’t have rain boots. He doesn’t have them because we can’t seem to manage getting them onto his floppy feet, and even then he’d have trouble walking in them, like trudging knee deep through mud. So, regrettably, we found ourselves stuck inside again with our sweet little ball and chain.

Later we went into town and spotted a local farmer’s market. “Let’s get stuff for dinner,” Michael suggested, so I clipped Rudy on the leash and we walked Calvin hand in hand across the street. There were about a dozen or so vendors selling produce and handmade wooden spoons, jewelry, organic chicken and Mexican food. As we strode between the booths I felt the weight of eyes upon us, on our impish four-eyed, swaggering, pigeon-toed son. A woman standing in line for chicken kindly remarked on Calvin’s motoring skills. “I swim with kids like—,” and she cut herself short. I looked her in the eyes knowingly and, with a knot in my throat, told her how much Calvin likes the water.

I purchased a roasting chicken then joined Michael as he followed Calvin between the parked trucks and cars banging happily on each one. A man from a nearby booth approached us with a bright yellow nylon mesh satchel he’d sewn. He lovingly offered it to Calvin. “Oh, he won’t be able to carry that,” I said, looking into moist eyes handsomely sunken into leathery wrinkles pulled taught across his cheekbones. “They’re good for putting shells into,” he added, to which I explained that Calvin would probably just want to chew it. “Please take it,” he said, “I have thousands of them.” And so I did, then Calvin grabbed it and stuffed it right into his mouth. We all chuckled.

But my throat tightened and I had to turn away, tears wetting my lashes. All this generous spirit toward our retarded kid nearly killed me and, at the very least, reduced me to a little heap of silent sobs of joy and sorrow. I had found myself amongst the kindness of strangers again, up the coast three hours from home in a place called Blue Hill, not far from another called Brooklin, and not surprisingly one of my most favorite spots in the world. 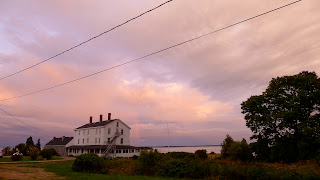 Posted by Christy Shake at 4:05 PM