I have a strong desire, when walking Rudy at night, to take my husband’s childhood BB gun and shoot out all of the streetlights in the neighborhood, leaving only the warm orangey glow bleeding out of windows, the occasional lonely twinkling beam from a humming motorcycle, and the smattering of stars above, especially when the full moon is low and bright in the sky like it was last week.

Nights like these remind me of camping in the deserts of eastern Washington when I was a kid: warm winds blowing through the tops of trees making that comforting swooshing sound as I drifted off to sleep, my willowy muscles radiating from a full, hot day in the sun with my friend.

In the deep sapphire sky, as Rudy and I scuffed down the sidewalk, a broad misty streak the shape of an osprey’s spread wing hung like a tapestry above us. Three tiny stars, the handle of the Big Dipper, dunk into a frosty translucent soup. I craned my neck again and the osprey wing had morphed into a menacing skull, drawn and sullen. When we reached the open fields, as we stood in the shadow of a huge pine, the neon moon cast an eerie scene, like those cheap seventies westerns filmed during the day to appear as if it were night, complete with long grotesque shadows and bright, seemingly unnatural, pools of light.

The crickets are out in force right now. I imagine the thousands of fawn colored bugs, like small wooden clothespins, hunkered down amongst dewy blades of grass, some perhaps warming themselves next to a light. They’re like so many of us puny humans, I thought, striving to do their best—just to survive—under an infinite canopy of stars, in a galaxy swirling like silt in a river eddy, in an ever expanding gorgeous dark universe that doesn’t care, just keeps on spinning just as my kid keeps having seizure after seizure after seizure. I thought, here we are with our insignificant little selves, our feet planted firmly in the gravity of this huge gyrating orb caring about people and things that the next guy speeding down the street is oblivious to, and might not care about anyway.

As we turned toward home I peered upwards again. The silken skull had become a feathered arrow, then nothing but a beautiful dissolving silver cloud, a chalk mark wiped scantly with an eraser. The moon streamed through fingers of oaks casting grey webs on the fronts of painted white houses. I looked for my friend Woody seated in the shadows on his porch grasping his usual Manhattan, but he wasn't there. As Rudy and I approached home I thought about all of the people and things I care about most—Calvin, Michael, friends, family, art, beauty. How fortunate I am, in this tiny corner of this obscure world in a universe more vast than imagination allows, and strolling up to the house, a deep red familiar glow pouring through the bathroom window, I thought, how glad I am just to be at home.
Originally posted 09.19.11.
Please share.
Give to cure epilepsy: http://www.calvinscure.com 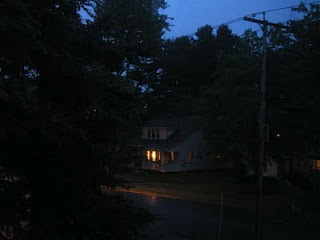 Posted by Christy Shake at 1:06 PM