Mary strapped him into his green machine and he motored off toward the door as if he knew where he was headed ... because he did. The three of us walked from his “functional skills” class down the long shiny hallway to his mainstream homeroom, Calvin’s acid-green gait trainer wheeling along under his command allowing him to be mostly independent. He went straight there. The second-graders were seated on the rug facing their teacher when we entered. A few of the children turned and said, “Hi Calvin!” The teacher gave up her chair for me, a purple one with sparkly paint, the color that stands for epilepsy awareness, I thought.

I sat and told the children a little bit about Calvin, about how he’d been born six weeks early and that his brain hadn’t formed the way their brains had. The children sat quietly, some cross-legged, others kneeling, all with sober, attentive faces. I went on to explain that Calvin's brain has roadblocks that make learning things difficult for him. Calvin sat at the back edge of the group squirming in Mary’s lap and giving her hugs, but he remained quiet as I spoke and I wondered if he knew it was his mama talking to the group. “Calvin has epilepsy,” I added, “Do any of you know what epilepsy is?” There was no show of hands, so I described how seizures are like thunderstorms that cause the lights to flicker and sometimes go out in Calvin’s brain making it even harder for him to learn. Then I opened the floor for questions about my boy.

“Will Calvin ever talk?” A pretty brunette girl asked.
“I’m not sure,” and I applauded her for her good question.
“When Calvin was born did he come out talking regular?” a cute boy in the back tagged on.
“No," I answered, "but when Calvin was a year and a half, before he got epilepsy, he said ‘Mama’ once."

Then I mentioned the seizure drugs. I explained how they make Calvin's development even slower and cause him to be dizzy and sleepy and limit his ability to walk without falling. “What do seizures look like?” another boy asked, and I did my best to simulate drop seizures and absence seizures and tonic-clonic seizures. “Those are the kind that Calvin has,” I told them. And then came the questions I found difficult to answer:

“Can people die from epilepsy?” asked the little brunette at my feet in a clear voice.
“Well, yes they can, if a seizure doesn’t stop,” I answered, purposefully avoiding the mention of the drownings, the suffocations, the fatal head injuries and the burns that seizures can cause.
“What kinds of toys does Calvin like to play with?” asked a bright, blond-haired kid in the front.
“He likes toys that rattle and light up and make music and sounds,” painfully aware of my wish to say that he liked Legos and bicycles and puzzles.

The children remained solemn, but I felt like I got through to them, their pure minds like blank chalk boards eager for beauty and love and thoughtfulness to be scrawled all over them. I was glad to see some of Calvin’s classmates from last year seated in the group; their faces told me he’d have some friends. And though they might not play with him the way kids do—four square, cards, tag, catch—they’d show him kindness and acceptance, which is all I can really hope for at this point. But kindness and acceptance go a long way in my book ... a really, really long way. 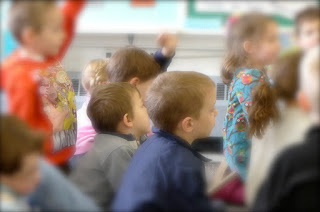