breakthrough: not what you think

I trailed savory ribbons down the stairs to where Michael leaned over the stove stirring homemade pumpkin bisque. The kitchen was filled with the delicious scent of lamb shoulder baking in a pool of onions, black olives and red wine. Calvin’s nurse, Beth, sat upstairs giving him a bath. He was wound tight as a drum, squealing and laughing and shrieking and flailing. In a manic spin he’d caught his shoulder on the faucet. An abraded welt formed, stippled with red pinpricks, but he didn’t cry.

“I hope Calvin doesn’t have a seizure,” I said to Michael as I grabbed Rudy’s leash and stepped out the door into near twilight, the ominous hunch stabbing my gut.

The two of us strolled slowly, Rudy’s grizzled jowls drooping down to sniff wet grass while I stepped like a schoolgirl onto fallen acorns, smashing them one by one. We walked past our two-beagle neighbor’s house, past the vacant one next door, past Woody’s place then crossed the street toward the fields. Rudy’s gimpy leg was giving him a little trouble so we lingered a moment on a wedge of lawn near tufts of downy milkweed sprouting like some bearded aliens from beak-shaped pods. Across the fields an orange sun hung low and peaceful through a stand of trees.

On the way back we stopped to visit with Mike, Woody’s neighbor who’s in his late eighties, if not ninety, as he raked leaves into a ready pile before dumping them into his pickup. Mike propped one hand on his truck, the other loosely grasping a rake. We chatted a while about Rudy and Calvin and, being dinnertime, we gravitated to the topic of food. I enjoyed shooting the shit with this tall, thin man who, in some ways, reminds me of my father, but I felt a gnawing urgency to get home. Finally, our conversation trailed off and we headed back in fading light.

Crossing the threshold I sensed something wrong. Dead quiet. Empty. Too early to be putting Calvin to bed. His pillbox was on the coffee table, his food put away. I ran upstairs where Michael and Beth were tucking Calvin into bed. “He had a seizure during dinner,” Beth said, “about three minutes.” She described it just like all the others of recent past: no breathing during the first half, slightly convulsive, very cyanotic. Beth hugged me. Then we pulled the safety netting tightly across his bedposts, looped the ropes around the caster locks and closed his door behind us.

It had only been eighteen days since Calvin’s last seizure, nine prior to that one which came on the heels of seventy-eight magical seizure-free days. The one on day seventy-eight was what’s known as a breakthrough seizure: a seizure that pops through a long period of seizure freedom. I’d heard countless stories of relative seizure freedom completely lost in the wake of a breakthrough seizure. In my mind I thought, they’re ALL breakthrough seizures, aren’t they? Ironic how, in the world of epilepsy, a word that usually carries a positive connotation is turned right onto it’s head. I wonder if Calvin will ever go seventy-eight—or more—days again, or will he ramp back up to having seizures every week ... or worse? The saddest thing of all is that now he is ingesting six times the amount of his newest medication while going fewer days between seizures compared to last October. 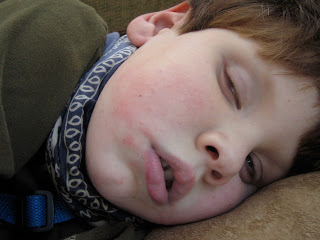