I was up nine times the other night laying Calvin back down in his bed, each time unlooping one side of the safety net secured to four bedposts and two casters. I feel like a new parent, peering into what amounts to a gigantic crib, to ensure that Calvin is still breathing. Sometimes, in the dark, my eyes play tricks on me and I have to grab the mini flashlight to see if his lids are closed, not locked glass-dead-open in the wake of an unstoppable seizure.

I offer him water, which at times he takes in copious amounts, but usually he’s simply uncovered. At eight years old he has yet to master the skill of covering himself up again. Sometimes I doubt if he will ever figure it out.

He’s growing fast, becoming the beanpole reminiscent of the men on both sides of his family, so that now when kneeling in his bed his head pokes into the webbed canopy. Soon, we’ll have to figure out some other solution to keep him from falling out of his bed. It’s unclear if we can teach him the danger and consequence of standing up in there.

Until we do we’re tethered to nights with a restless child, a grumpy-as-hell, sleep-deprived mama and a daddy who saves us all by crawling into bed with Calvin who, as a result, sleeps like a baby should. 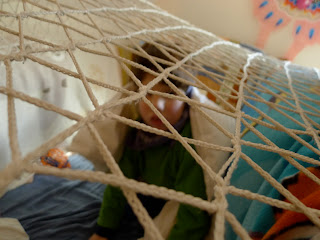 Posted by Christy Shake at 1:33 PM