under blue skies and palms

At coffee yesterday, under the shade of a street-side porch, my sister-in-law asked me if Calvin had any words. “No,” I told her, then went on to explain how he’d said “mama” once when he was eighteen months old. I mentioned how Calvin’s only obvious sign is for “hug,” but that he vocalizes a lot—cooing and laughing and screeching—which gives me hope that some day he will learn to speak a few words.

Calvin’s ability to gesture for things is practically non-existent, save reaching for his sippy-cup, or banging on the table at times when he is hungry. Once in a while he will shake his head when he doesn’t want any more food. But the gesture for “no” hasn’t translated to other situations, and he has yet to develop a sign or gesture for “yes.”

When I called home yesterday Michael put our expressive boy on the phone with me, holding the receiver to his ear. At hearing my voice Calvin immediately stopped to listen, but then quickly tried to put the phone in his mouth. Sometimes, when I hear Calvin on the phone I realize how very different he sounds—is—from other kids.

At the beach yesterday scads of children dotted the shore. Through squinting eyes I watched them running back and forth from the water, shrieking at big waves rolling past them, tossing clumps of sand and digging holes with little plastic trowels. I tried to delight in the scene but couldn’t. All my days since Calvin’s birth I’ve longed for him to freely scamper around at the beach finding shells, writing words in the sand and chattering excitedly in the wild surf.

And, though it hangs by a thread thinner than spider’s silk, I don’t give up on that dream thinking, perhaps one day under blue skies and palms, wading in waves brushing a sandy beach, Calvin will cup his hands and call out, “Mama!” 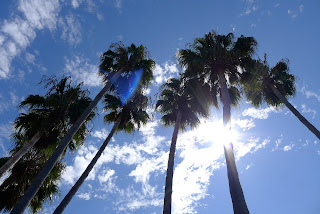