As I walked into the open field with Rudy I began to cry. The diamond was flanked by fans dressed as I was in their long down coats, hats and scarves that belied the sunny April day. Behind the outfield barrier two boys no more than five or six tossed a ball and ran around an imaginary diamond of their own. I thought about my brothers' baseball games when I was a kid. I never watched them with my mother. Instead, I scampered around under the bleachers with friends making jokes about Seymour Butts and eating frozen MilkShake candy bars purchased for ten cents at the concession stand window. I could roam where I wanted. I was free. I was healthy.

As the two boys played tag, the littlest outpacing the older one in a burst of energy, I thought of how I'd been small and quick and how Calvin might've been too. And with that thought my throat thickened and ached watching the boys do little boy things with confidence, agility and freedom. Not my Calvin, I thought, never my Calvin, and I cried into the scruff of my jacket thinking of what a good mother, good coach, I'd have been for such a boy if he were mine.

My tears were as much for me as for Calvin who was at home spinning like a top at the fingertips of a new nurse who I'd spent the day training. I felt guilty leaving the house since, because of Calvin's increased mania, I'd been expecting a seizure for over a day.

At home I got Calvin into his high chair for dinner. As I chopped some chicken and Brussels sprouts I replayed the day in my mind—Calvin's quiet morning, his odd shriek at the end of a frenzied bath, his low-grade temperature, his raving, his pale face and flushed cheeks and space-outs in the car—all repeats of the day before. But after a decent dinner, a poop and a diaper change, I escorted a much calmer Calvin downstairs, walking down backwards in front of him holding his harness to prevent a fall. I praised him for his enterprise and was rewarded by his gleaming smile that dissolved orange-pink into my heart. But then something snapped. His eyes blinked and froze into an upward gaze as if he'd seen a ghost. Calvin stood paralyzed on the steps like a statue. I knew that what I'd been dreading had arrived, so I picked him up and carried him to the couch. He squirmed in vain to free himself from the seizure's grip as it took hold sending tremors from his head down to his little white socks.

No matter that I've seen my boy have hundreds and hundreds of seizures, I'm always surprised and distressed by the kind of violet that stains his fingers, hands, toes, ears and lips. It's beautiful and horrible. The shade of bloom and death. The color one fears will never fade to blush. The color no mother of a beautiful child should be reminded of when the tips of purple crocuses come up on a cold sunny day in April. 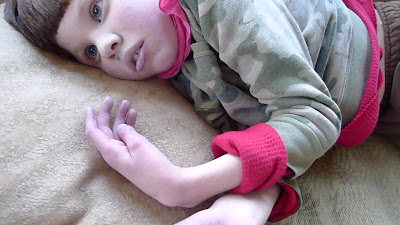