This morning I could’ve used a breakfast bourbon, you know, to take the edge off. Having woken several times last night to reposition a restless boy, I was up for the day well before sunrise listening to Calvin bang and screech and holler from his bed only to continue until I sent him off on the bus at quarter of nine.

Yep, a breakfast bourbon might’ve done the trick, or perhaps some of Michael’s homemade bourbon eggnog or a splash of Irish coffee. On mornings such as these I’ve impressed and amazed myself that I’ve never dipped into Calvin’s ready benzodiazepine stash. I guess I’m just not an addictive kind of gal, nor one who is looking to become addicted.

But I’ve acquired a taste for bourbon of late, seeing that my old standby of red wine has begun to give me headaches the closer I get to fifty—years old, that is, not ounces. I’d been looking for a replacement drink for a while. White wine, though it doesn’t seem to give me headaches, is too cold. I wanted something warm to accompany me through Maine’s long, frigid winters. Bourbon always seemed to bite, (and screwed up my face some as it went down), so much so that I never made it to that second sip. Besides, it has ice in it, which gave me goosebumps and made me shiver just to think of.

One day, about a month ago, I took that second sip off of Michael’s bourbon. And when it went down? That was some kinda hot shit. It tasted so good that I had to ask Michael, “Do you think I could ever become an alcoholic?” to which he replied, “If you’re not already I don’t think it’s likely.” I understood his retort to imply that with an effed up life such as mine, what with this impossibly crazy kid of ours, most anyone else would’ve been hitting the booze pretty damn hard by now.

And so, it is—and with my doctor’s approval—that I can enjoy a glass of my choice, sometimes two, nearly every night just to take the edge off. And it’s not always bourbon; last night I enjoyed a scant glass of my father-in-law’s homemade pinot noir and it did the job just fine.

As far as breakfast bourbon goes, I’ll be dreaming of it for now and, come the holidays, enjoying it to the utmost in the flesh. 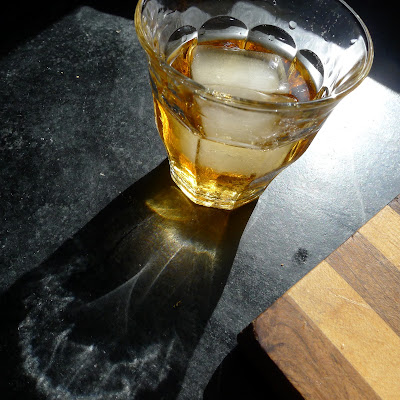 Posted by Christy Shake at 4:10 PM