On Monday I wrote a post on the Trayvon Martin shooting called To Kill a Mockingbird, expressing my regret about the incident, its handling, its outcome, about racism and about the ignorance and hatred some express toward those who are seen as different. One reader commented:

Trayvon was a thug going down a path in life of criminal choices and messed with the wrong "white cracker" as he put it and paid the ultimate price.

I responded to the anonymous reader by noting that Zimmerman, the pursuer, was in fact the one with the violent criminal record, while Trayvon, the victim, was an innocent teen minding his own business, likely trying to defend his own life against an armed predator. He did not deserve to die.

In a stream of consciousness, I thought about my cute, sweet, innocent son Calvin, and the remarks I sometimes get such as, “He is an angel who was put on earth to teach us something.” I can’t help but think that these comments—the one in response to my blog post and the ones said about Calvin—are somehow, however odd it may sound to some, similar.

To say that Trayvon Martin was a thug—a boy with no criminal record, a boy not unlike most American boys his age, similar to boys I grew up knowing who cut school, clowned for the camera, perhaps smoked pot, wore hoodies and sneakers, flipped the bird—smacks of racism, a convenient attempt to lay blame on the black victim in the same way a rape victim is often seen by misogynists as somehow culpable for her attack. To say that Trayvon was a thug ignores—while at the same time epitomizes—the miserable truth about racism and racial profiling and their egregious impact on our criminal justice system, on our prisons, on the safety, harmony and cohesion of our society. It surrenders to stereotypes rather than facing facts, as uncomfortable as they might be for some individuals: that a black male youth was the victim, not the miscreant. Trayvon was not a thug.

Similarly, to say that my disabled, developmentally delayed, non-verbal, seizure-ridden, drugged-up little boy Calvin was put here to teach lessons to those of us privileged enough to have good heath and fit brains, succeeds in ignoring the pain, burden and senselessness of a suffering child. It is an effort to make it all okay, to mitigate what is most unfortunate and harrowing rather than facing the many truths of a disabled child’s life, which, along with joy, often includes hurt, frustration and heartache. To justify a child’s existence in this way is to say that somehow it is their charge in life, that their suffering was meant to be. How else can the words be interpreted? Certainly, I have the ability to learn from Calvin, which I have done and continue to do, but he is not here expressly for that purpose. There is a distinction. Calvin did not deserve to pay the price of poor health for my gain. Calvin is not an angel.

Yesterday morning I saw a very sad video of my friend’s child, August. He is a boy who has a lot in common with Calvin, though he is several years older. For unknown reasons, August has regular bouts of extreme extension, lasting days on end, causing him to arch in a way that appears impossible for a body, even a young one, to do. In the video August whimpers and groans, and in his pain I see my little Calvin, who often exhibits discomfort, which at times is difficult if not impossible to ascertain or remedy. Though the video includes a caution as to its disturbing nature, I chose to watch, did not avert my eyes, because I want to know, I want to tell people everything about our children, that they are often happy, sweet kids but that they are also sad and often suffering. They are not on this earth to improve us. They are just here and we are here for them, and thought it might sound harsh, it is presumptuous and flabby to say otherwise, even if it is intended to be kind.

To hold these beliefs—that Trayvon was a thug or that Calvin is an angel put here to teach us lessons—is to dismiss one’s self from the messy reality of life’s inequities, to turn a blind eye to the hard questions and the difficult challenges that racism, disability and suffering present to those who experience them and to the larger society, simply because somehow it’s easier, it’s comfortable, it’s convenient just to believe in angels and thugs. 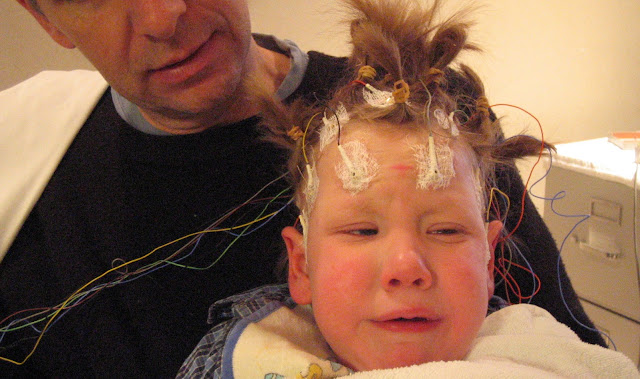 Posted by Christy Shake at 2:13 PM