I soothe my conscience now with the thought that it is better for hard words to be on paper than that Mummy should carry them in her heart.

These words come to me when I write about feeling down, hopeless, lonely, frustrated and grief-stricken. And though I sometimes wonder if what I write in this blog is too hard for people to bear or to understand, I realize that writing it down and sharing it is something that I must do for myself and perhaps, too, for others.

I often wonder if the blood and marrow cancer that began consuming my father when he was just sixty-five, then took his life five years later after a hard fought battle, might have had something to do with having held stuff inside for so many years—his fears, his regrets, his failures, his frustrations, his emotions. At times I have little doubt, as if the mix of those feelings and thoughts festered and boiled inside the body that contained them and eventually became his demise.

So when I find myself, like this morning, caving under the weight of a wordless, irritable child who is headachy or nauseous or frustrated, who has terrible balance and thus requires me to catch him at a moment's notice when he trips and careens and collapses while waiting impatiently for a bus that is late, then I snap at his aide and condescend to the driver and slam the door and break down into tears and gripe at my husband and scold Rudy the dog and scowl at passing drivers and hiss at gnats and stomp around an empty house then, in silence, I realize that I am getting some nasty stuff out. And so I take a deep breath and get it down on "paper" so that I might not get cancer, so I can clearly see my tasks, which are sometimes heavy, so I can forgive myself, so I can apologize to the aide and the bus driver, so I can greet my husband with kindness and my son with patience and the world, perhaps, with a smile. 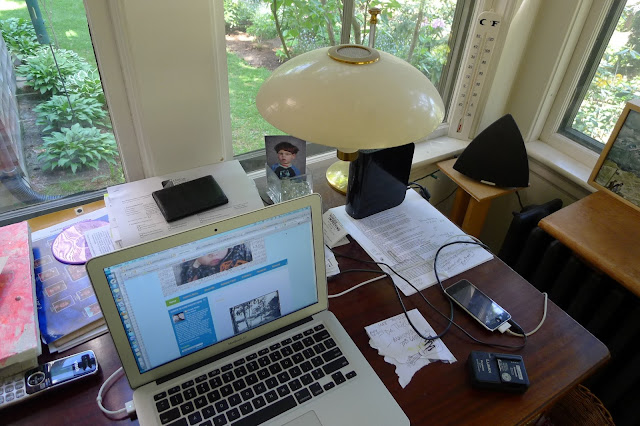