friday faves - in the bedroom

At times it smells faintly of urine, or of feces in the seconds after tossing a tightly wound diaper into the small garbage can. At others it's talc, when I've crop dusted the blue area rug with absorbent fountains of powder squeezed from a white plastic bottle. It’s somewhat small and, except for the fact that it has its own closet (albeit without a door) it barely passes as a bedroom since Michael and I must pass through it to get to ours. In the middle of the night when I'm up repositioning Calvin, at times I can hear the faint scratching of some insidious animal rummaging around in the space under the eve that hangs over his bed. It’s a disturbing sound, not only for the knowledge that vermin are lurking mere inches away, but because I sometimes mistake their scraping for the sounds of Calvin’s nocturnal seizures.

On a built-in bookcase that hangs between those eves stands a group of framed black and white photos of Calvin’s relatives, none of whom he’ll ever know existed: my dad, my mom, my great aunt, my grandmother and grandfather and one of me with my dad when I was about two. In the photo capturing my mother as a beautiful co-ed, she peers through a clean crack in the glass. Dust grows on the photos like moss on a shingle. There are no books—most having found new homes on other kids' shelves since Calvin can't sit still to page through even the shortest of stories because the seizure drugs make him hyper. In a frozen tailspin, a balsa wood airplane, that Calvin will never play with, leans against the photo of my mother. Above it, slouching on top of the bookcase are some forgotten stuffed animals given to Calvin when he was a tot. He doesn’t appreciate plush, at least not yet, so we’ve regifted an arc's worth over the years. I’ve kept the powder-blue teddy bear that Calvin got from my mother when he was in the NICU—the stitches in my belly still tender and numb—and the green Ugly Doll, my favorite odd body—a misfit—but adorable, just like my boy.

Calvin’s massive SleepSafe bed, complete with memory-foam mattress, head and foot articulation and safety panels, takes up much of the space. We’ve tented it with an old hammock suspended from a hook screwed into the bookcase. It stretches over the stocky bedposts, then is anchored by two ropes looping over the metal locks on each outside caster so that Calvin can’t fall out. Getting him in and out requires doing and undoing the apparatus each time, plus raising and lowering, locking and unlocking the panel. I’ve placed a little wooden footstool next to the bed so at night I can unloop one side—without lowering the panel—and reach in under the netting to give Calvin water or to move him. The safety panel is nicely padded, a job done by our friend, Joe, who makes custom boat cushions for a living. The rest of the bed is covered in thick layers of blankets and quilts with an overstuffed pillow at one end to buffer head butts or falls. Calvin seems to like his bed. It’s his safe place—his man cave—where he can move around and bite his plastic football and play with his feet to his heart's content without hurting himself.

When it comes to the changing table, it’s clear he’s outgrown it. Ironically, it’s a stainless steel medical instrument cart that I picked up for too much money when I lived in San Francisco and used for serving drinks at parties. The top of it is layered with about five or six baby blankets he received during stints in the pediatric intensive care unit.  The shelf below is littered with bags of diapers and diaper pads, boxes of acetaminophen suppositories, tubes of steroid creams, triple antibiotic and vials of other ointments. Curled up somewhere under everything is a cheap-ass stethoscope and a cheap-ass oxygen saturation monitor which I think I’ve tried once—unsuccessfully—on Calvin. There’s an old plastic baby-wipe box containing various sundries such as rectal thermometers, K-Y Jelly, more suppositories and ointments. Stuffed under the changing table next to a mega box of baby wipes rests a crumpled paper bag full of pediatric urine collection bags, sterile cups, plastic biohazard baggies, nitrile gloves and iodine swabs. It's a veritable nurses' station, if not for the dust bunnies that abound.

Calvin’s dresser is crammed with gobs of great finds from the Salvation Army—GAP, Old Navy, Ralph Lauren, Oshkosh, Hanna Anderson—and a few hand-me-downs that friends have given to him. I’ve been told he’s the best-dressed kid in his class—not fancy, just cool—one small way I can help him assimilate with his peers. On top of the dresser amongst his morning thyroid medication and other sundries emerges a compact stereo in which we play the same Baby Mozart CD he's been listening to every night for years. On top of that I keep a mini flashlight at hand to peer in on Calvin when I hear him rustling in the dark of the night.

He's in his cozy bedroom right now, taking a morning nap. Lately, the epilepsy drugs make him sleepy after breakfast. He's all curled up at the end, clasping his orange plastic football to his lips. Makes me want to crawl right in with him and dream of him as a healthy boy in a sweet smelling room full of books and Legos, crayons and coloring books and a well-loved cigar box holding coins, rocks, marbles, seaglass and shells from the kind of summer spree I used to have as a child but one that Calvin will probably never get to enjoy. 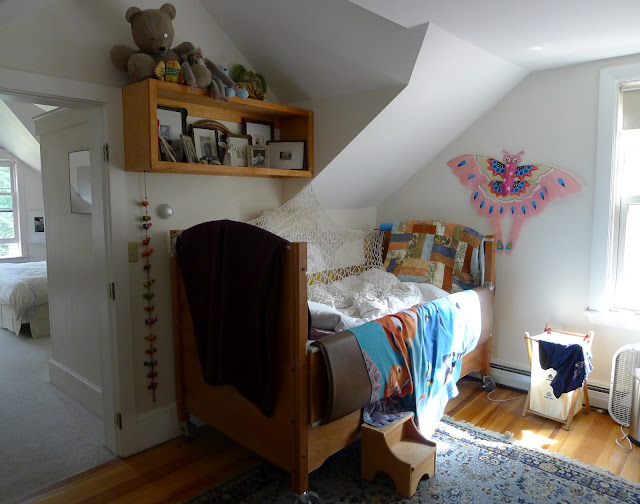 Posted by Christy Shake at 1:31 PM