“You ok?” my husband Michael wrote from Boston having read yesterday’s blog post. I said yes, that after a tired, frustrating, angry morning with an impossible child I enjoyed a walk through the woods and a rest in the sun with my friend, Lauren. She and I were going to top off the day with an early evening glass of wine but my gut told me I should return home to check on Calvin since we had just reduced his benzodiazepine due to increasingly manic behavior.

Lauren and I hugged goodbye and I got to making Calvin’s dinner while Barbara, his nurse, was upstairs giving him a bath. “Christy!” she shouted, and I ran upstairs knowing what to expect. She had Calvin cradled in her arms trying to get a foothold on the wet tile floor. “You got him?” I asked, his slack, slippery body making him difficult to carry. She confirmed, and we rushed him to the bed.

Calvin’s face was purplish with blotches of scarlet-flush and cyanotic blue. He felt warm. His hands were dusky right up to his wrists. For minutes he went without a breath. I kissed him on the neck, gave him raspberries there too, hoping to disrupt the frenzy of electric impulses marching through his brain. Barbara massaged his back. “Breathe, Calvin, breathe,” I pleaded, and at six minutes he whimpered and tried to suck his thumb.

Later, I called up Luke to say I wouldn’t be making it to their costume party. “You’re a good mom ... you sacrifice so much,” he said, and then, "It sucks." My voice wavering, I agreed, knowing that he felt my pain in the most intimate way possible, the way parents of kids like ours do. “I love you guys,” he ended, and I told him that I loved him too.

Next, I called Roger to say that I didn’t need him to escort me to the party in Michael’s absence because Calvin had just had a seizure. He told me that as soon as he finished feeding the kids he’d come over, make me a drink and stay for a while. He added that he and his wife can’t do much but offer thier friendship, though they do much more than that.

Today Calvin is fine, but he remains irritable and whiny. I read my friend Elizabeth’s blog saying that a strain of medical marijuana with high cannabidiol (CBD) is helping her daughter who usually suffers several seizures daily. She wrote that Sophie is smiling and making interesting sounds. I’m going to meditate on that, and on my wonderful circle of friends and, while I breathe deep and exhale, I'll think of that serene spot at the side of a still sea that I can see clearly through a stand of shivering trees. 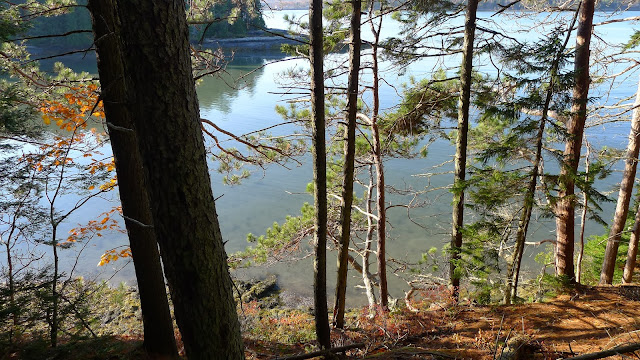