I'm typing away on my laptop looking at Calvin's school photo from last year, second grade. It sits unframed at the back corner of my desk resting on a handful of glass pebbles in a square vase, also made of glass, as if floating in a crystal pool. If you look closely you can see a strand of drool as thin as spider silk trickle from Calvin's lower lip down to his shirt. In this photo, as in all of his other school photos, his eyes are hazy, his mouth slack—symptoms, I'm most certain, (along with the drool), of the effects of the anticonvulsant drugs. That the photographer got the shot with Calvin's head up looking into the camera is near heroic, in great part due to his one-on-one, Mary, who helped prop Calvin up and kept him still, and then was photoshopped out of the picture.

The photo, a favorite of mine, makes me happy and sad at the same time. Happy to see his soft features, tussled hair, cute ears, and sad because of the oblivion and fatigue it seems to express. Right now I am sad looking at it because Calvin just had another seizure in the bathtub. I'd been sitting right here writing while his nurse, Barbara, was giving him his bath. I was trying to enjoy—rather than dread—his excitedly crazy coos and vocalizations, which easily made their way down the stairs to me. Suddenly, the house became eerily quiet. I heard only the clocks ticking, the furnace running and the cars passing on the street out front. The silence continued until Barbara called out my name.

Upstairs within seconds, I took Calvin from her, a towel draped across his body like a toga, the rest of him naked and dripping. As we laid him on the bed and called him back to us, we noticed he wasn't convulsing at all, just still as a glistening stone, his thin legs curled up fawn-like. Barbara had set her phone to stopwatch, and around two minutes Calvin whimpered, "Uh-uh:" Mama.

For several more minutes he remained in a catatonic state, though his lips changed from lavender to pink. He said Uh-uh again, then once more. "Mama is right here," I told him, "you did such a good job ... it's all done, Baby," and I kissed him again on the neck. "Day eight," I said to Barbara, though in reality it was only day seven. "Last fall he went seventy-eight days," I added, "He's having seizures ten times as often as that," I told her, and we dressed his warm, floppy body, then she gathered him up and laid him gently into his bed.

We'd seen it coming: his lackluster morning; his intermittent shrieking; his stubborn refusal to walk down the wide hallways of the mill under flickering fluorescent lights; his insistence on being picked up; his seizure-breath; his unusual lack of smiles. Yesterday's good day had been the calm before the storm. I'm feeling a sort of global warming coming on, an increase in these white-hot events, an El Niño. I want to batten down the hatches, sandbag—anything—to save my kid from these waves of seizures and drugs that wash over his brain seemingly drowning him right before my eyes. 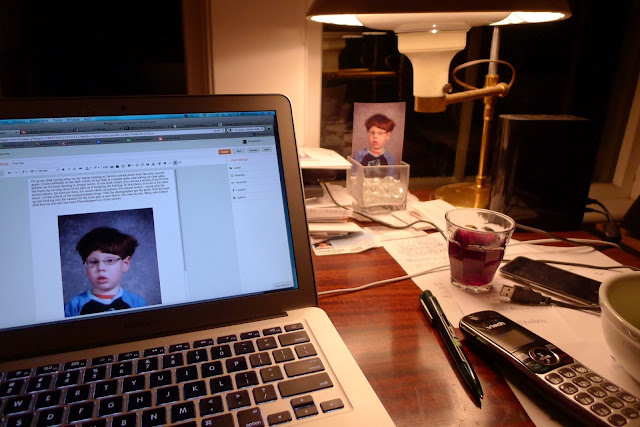