I approach the room which is glowing with large white paper umbrellas open and propped sideways on tables, each with its master standing at its side. Everyone is wearing long white t-shirts spattered with paint and glitter. It’s Mr. Shea’s fifth grade class painting beautiful parasols under Ms. Moll’s kind, creative direction. I enter just behind Calvin who is greeted by a chorus of young voices chirping, “Hi Calvin!” A few of them look up from their projects to see Mary, Calvin’s one-on-one, wheel him into the class in his special chair, my boy clad in an oversized t-shirt spattered like their own. It is time for Calvin to make art.

Calvin is at his most hyper and I cringe. I mention to Ms. Moll, Emily, that it’s either because he has to poop or burp or it’s the change in his meds or it’s that he’s going to have a seizure later. I imagine it’s all of the above. Calvin shakes his head back and forth like a dog with a bug in its ear, screams and flails and laughs hysterically. All the while the other students attend to their craft with great focus as if Calvin isn’t even there, their feathers not ruffled in the least by the crazy bird that is my son. He is one of them. They’ve put my little third-grader under their wings.

I introduce myself as Calvin’s mother and big smiles come across the students' faces as they welcome me. One girl says, “Hi Mrs. Kolster," then wonders if that is what she should call me and I say, smiling down upon her, “You can call me Christy.” Emily tells me that these students are working on a special project that her other classes aren’t doing and it’s because, she says, of how kind they’ve been to Calvin. I stifle my tears. She shows me her array of Harriett Beecher Stowe paraphernalia she’s collected in honor of the school’s namesake. I mention how Uncle Tom’s Cabin is one of my very favorite books, and I think of the others—Mary Shelly’s Frankenstein, Catcher in the Rye, The Great Gatsby—all classics, all about misfits, eccentrics, runaways. And I think about myself. Then I consider my son sitting there like a little monster, and realize that this character, despite his odd behavior, his lack of words, his inability to assimilate, is loved by so many.

While Mary and Calvin slather paint on a gesso board and on each other I watch the other students busily working away. Emily shows me the glitter and special gold paper she wants to use for Calvin’s next project. I can see her love of craft, sense her fondness for texture, color, shape and function. It's something that I vaguely recognize in myself, well faded by now having been years since I put a brush to canvas, a pencil to paper or a stitch to cloth. Now my art is in words.

As we stand in the doorway I tell her about Calvin and his seizures and my quest for medical marijuana to treat them. Her dangly earrings, like strands of shells or buds, glow frosty white. The whiteness of the room, the gentle nature of the students, the Zen of the space fills me, lifts me up, cools me off. “Bye everyone,” I say, and they respond in unison as they did at the start. “Thank you for being so kind to Calvin. Can I come back again sometime?” Their smiles and eyes, as well as their words, tell me, “Yes, please," and with that I know the world is going to be okay. 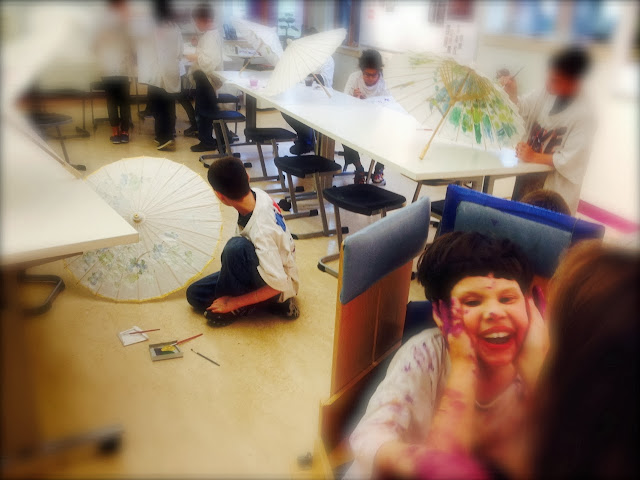