Two weeks have passed since we discovered Calvin's toxic blood level of vitamin B6 and eliminated it from his regimen. I felt its removal was warranted, though I wonder if perhaps its abrupt withdrawal has messed with Calvin's benzodiazepine and/or cannabis levels seeing that they all use the liver's cytochrome P450 to metabolize.

In the removal's wake, Calvin has been more lethargic than usual. Perhaps, as his white blood cell count indicated, he was/is suffering from some sort of virus. He has improved slightly with each passing day, and I haven't seen a seizure in a week, but his stubbornness, as manifested in his refusal to walk where we want him to, and his tendency to want to drop down in those moments—often in the middle of a crosswalk—has made taking care of him exasperating; there are few places we can take him where he is willing to walk more than a couple of yards, though he is fully capable of doing so (we know this because he likely walks virtual miles while at school).

We stay at home more than usual, it seems, and even getting Calvin to stroll in the garden with me lately—a daily routine—has proved challenging. I feel our already small world closing in on us, and the places we can take him are limited to the grocery store, the health food store, the donut shop, the coffee shop and Woody's house three doors down. Often, he won't walk for more than a few steps before attempting to drop down, and I have to yank him along like a mule since he is getting too big to carry for any distance, in addition to my refusal to enable this behavior or play into his pranks.

Complicating an appropriate response to his behavior is that I never really know if his stubbornness is like that of a toddler exhibiting his will, or if it is because his bones or muscles in his hips or thighs or knees or shins or ankles or feet hurt or are numb, or if he is feeling dizzy or headachy or sickly, or is experiencing the effects of benzodiazepine withdrawal, or if a seizure is coming. And so I find myself swinging from patience to intense aggravation, and I feel the scowl carving lines into my brow.

In passing, friends ask us the customary question about our plans for summer.

"We can't really go anywhere with Calvin," I say, mostly not bothering to explain how we'd have no safe place for Calvin to sleep and great difficulty doing any activity with a non-compliant, non-verbal, incontinent, agitated, thirteen-year-old boy save strapping him into a thirty-five pound adaptive stroller which has major limitations and aggravations of its own.

And so, we find ourselves in a decade-long conundrum: spending most of our time at home moving about the house from bed to jumper to bathroom shutters and back again. I try, though not hard enough, to get us both out of our safe yet monotonous and psychologically ruinous comfort zone, which is the only way we'll both continue to grow. 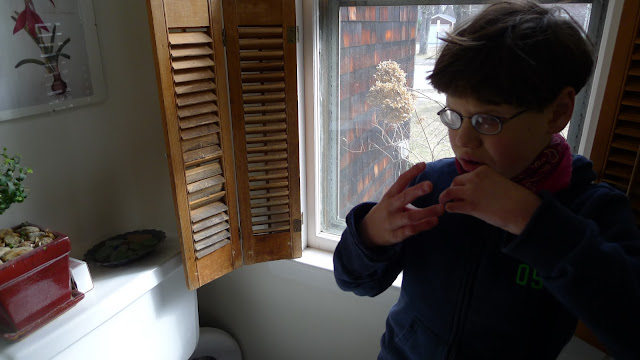 Posted by Christy Shake at 1:22 PM