I often remember back to the day Calvin was born, six weeks too early and by emergency cesarean. The doctors in the neonatal intensive care unit told us he had very poor muscle tone and hadn’t been able to adequately breath on his own, needed to be put on a respirator. Calvin couldn’t keep his heart rate down or his body temperature up. They told us his ears seemed low, his pinkies curved in and his eyes were too far apart, all signs that he might be suffering some serious genetic syndrome. My mother has a wide nose bridge, I’d tell myself, he’s a preemie and has shark eyes anyhow. What do they know?

My memories drift to the first few weeks of his life when he wasn’t able to nurse, hadn’t yet developed the suck-swallow reflex and couldn’t latch on, had to be fed predominantly by a plastic tube threaded through one nostril and into his stomach. After meals he’d arch and scream with terrible gas pains and burning reflux. He was barely five pounds, hadn’t put on much weight, and was as floppy as a well-loved rag doll.


At four months of age Calvin began physical therapy, followed by occupational therapy and speech language therapy when he was just six months old. During PT we’d lay him down, his tiny arms and head supported by a neon stuffed fabric worm, an arched play-mobile suspended above him. Just within reach, and close enough for him to see with his terribly impaired vision, dangled some bright plastic rings, a green frog sprouting striped legs with feet that rattled, and a shiny round mirror, things any infant would love to bat and swing. But Calvin’s arms remained flaccid at his sides, as if gravity were a giant magnet pinning them to the floor. Peggy, his PT, had given me a complex chart of developmental milestones for a child’s first three years. I marked it with an orange highlighter and dated it in black ink whenever Calvin met any. For months the chart remained mostly blank. It still is.

The neurologist told us that Calvin was missing as much as eighty percent of his white matter, the brain’s super highway responsible for transporting messages between different parts of the brain and his body. He gave us the grim news that Calvin might never walk, might never talk.  My precious son, I sometimes thought, my only child, might never become more than a blob—a crying, floppy, useless, blind-as-a-bat blob. The image was petrifying and all too real. But never did the man mention the possibility of seizures.

Then, at the age of two, the seizures came. I'd read about them, the way they can strike anyone without a moment's notice, and especially kids with cerebral palsy, autism, developmental delay, mental retardation and preemies. First, they came slowly, infrequently, then descended like a cloud of locust in a single day—not hundreds like some children suffer—only a dozen or so, but they devoured my spirit and shook my countenance as if it were so, and landed us in the pediatric intensive care unit more often than I'd care to remember. Who knows what havoc they were wreaking on poor little Calvin's delicate brain? And as the fear and reality of the seizures consumed our world, the missed milestones—to a great extent—were forgotten, didn’t seem to matter. Our child was profoundly ill and no drug, or combination of drugs and dietary therapy, could stop them—these seizures, like freight trains burning up miles and miles of tracks in Calvin’s brain.


And while I still grieve the fact that Calvin can’t yet walk unassisted, can’t utter any words, can’t do any task without our help, those missed milestones have taken a back seat to the relentless seizures, without which Calvin wouldn’t have to ingest so many mind-altering, sedating, over-stimulating, dizzying, debilitating drugs, both of which (the seizures and the drugs) cause him to miss the milestones anyway.


In honor of epilepsy awareness month, please share this story with others. Help bring us one step closer to a cure. 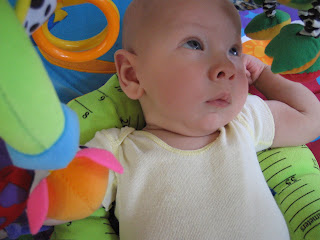