I leaf through a thin stack of papers that come home from school with Calvin and toss out the ones about the book sale and the basketball night. A large white envelop with a cellophane window reads A Smile worth Sharing. I fish out a thick page of photographic paper telling me it’s the last chance to order and that pictures this good would be a shame to miss! There on the page is Calvin’s sweet mug staring up at me with that glazed, zombie, drugged-up expression I know all too well. Under a mop of shiny auburn hair, behind thick glasses his eyes droop, nearly at half-mast. He’s what I’ve heard people call a mouth-breather, his lips slack, tongue showing. At first I don’t notice, but when I look closely with my reading glasses, I see a thin, elastic strand of drool trailing in a curve from his bottom lip to his blue fleece shirt. Those damn drugs, I think, he wouldn’t drool if it weren’t for those frigging drugs. My mind compares this photo with the hundreds of bright-eyed snapshots from before the seizures, from before thousands of chalky tablets, crystalline filled capsules and syrupy, syringed liquids we've had to pump into him.

At the town’s cozy public house Michael and I sit at the end of the bar drinking beer and eating the most delicious cheesy fries I’ve ever had, the kind with tons of melted cheddar, a mound of sour cream, bacon crisps and sprinkles of chives. A couple of patrons have brought their little kids, both of whom barely come up past my knees. Even so, these kids are walking and talking and eating and drinking ... all by themselves. Their eyes are bright. They can sit in their chairs without falling out. They engage with their environment, handle a fork, look around the room, smile and laugh at the things their parents say.

Later, I remember what a friend had once written about her children, saying how fun it is to see them grow and learn. And here I sit in tears over Calvin’s nearly stagnant progress these past seven-and-a-half years. Michael puts his arms around me as we watch Calvin play on our bedroom floor with his toy piano, picking it up, mouthing it and dropping it ... over and over and over and over. He remarks on how much better Calvin is doing now, how happy he seems, how few seizures he's having, how he plays by himself a little. And while it's some consolation, it's also a bitter reminder of how bad things once were and how having a seven-year-old who is still in diapers, can't walk without assistance, can't utter a word, can barely do anything by himself, still has seizures and must take ridiculous amounts of drugs is an improvement over the boy he used to be.

We’d taken a trip to our favorite coffee shop in the next town over. It was a brisk morning. Michael unloaded Calvin while I clipped Rudy on the leash, the wind whipping in our faces. We each took one of Calvin’s hands and lead him uphill on the bricked sidewalk, cheering him as we went, sensing he might collapse or stumble with each pigeon-toed step. In the painted crosswalk we passed a mother with her teenage son who must have had cerebral palsy, autism or both, his turned-in feet and slight limp, cocked head, retracted arms and spastic hands all dead giveaways. As we stepped up onto the far curb and entered the joint I began laughing. Little ironic tears set into the corners of my eyes. Michael looked at me curiously, wondering what was so funny.  Halfway under my breath I snorted, “RETARD CROSSING,” and he burst out in a chuckle of his own. “I gotta have a sense of humor about it once in a while,” I said with a pathetic little smile on my face, knowing I'd bristle if I'd heard anyone else say that kind of thing, want to smack them upside the head. Compassionately, Michael replied, “of course we do,” and I knew we were both thinking of the sorry scene trying to get our goofy, drooling, drugged-up, floppy kid just to walk, and saying to ourselves, poor little kid ... poor little kid.

Over halfway through epilepsy awareness month and we need to keep the campaign alive. Please share this story and change a life. Help bring us one step closer to a cure for epilepsy. We do the hard work, you just push a button. 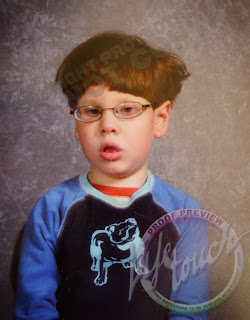