If my kid could, he’d eat a slipper sandwich, including felt upper, rubber sole and velcro closure—the lot. If I’d let him he’d eat mouthfuls of dirt, pine needles, the bark off a tree, and pebbles of any kind. He isn’t at all discriminating about pebbles. As it is he’s gnawed splinters out of his wooden high chair tray leaving a big round dug out patch in the center of it. He’d bite a chunk out of a drinking glass if he could, but instead he shaves bits off of the hard plastic spouts on his sippy cups, gouges deep ravines into them with his sharp teeth, roughs them up until they're like sandpaper.

For as long as Calvin has had teeth he's used them ... a lot. It's a sensory kind of thing, not uncommon with kids who have visual impairments and kids who are somewhere on the autism spectrum, which, we've been told, Calvin is, though I imagine his behavior is as much due to the seizures and the drug side effects as anything.

Calvin came home from school the other day with some sticky black tar around his mouth, on his nose and behind one ear. He’d yanked off his glasses and had been chewing on them, must have dislodged the gooey, melting electrician’s tape I’d used to doctor them up some months back. The tape was nowhere to be found. I might find it later, if you know what I mean.

He eats my hair if he can get it into his mouth. I’ve seen a long, beaded piece of it come out in his poop. Pretty. But his favorite things to munch on are his slippers, shoes, socks, books, the side of the car, the wooden shutters in the bathroom, the brick wall, the radiators, the tile and grout in the shower, the faucet in the tub, all of his toys and the rickety rattan basket that held my wooden blocks when I was a child that is now used as a hamper for dirty clothes.

I feel like I’ve told Calvin to stop biting things at least a billion times, which makes me wonder if my little beaver is ever going to leave it. If not, we’ll have to invest in a few more pairs of slippers than your average parent, and I'm sure they'll all be considered the flavor of the day.

In honor of epilepsy awareness month, please share Calvin's story. Help bring us one step closer to a cure. 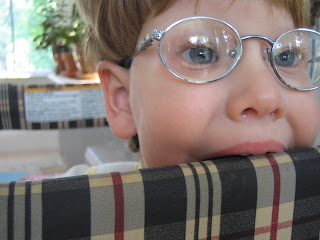