I came home Friday night with three things: a nice buzz, a simple figure drawn on a napkin and a smile on my face.

I’ve always loved going to the movies by myself, hunkering down in the dark with a bag of popcorn immersing myself in a good film and forgetting everything else. So I sat myself down for a late matinee in a squishy couch at the front of our modest single screen theater. I knew Michael, who was out of town, probably wouldn’t enjoy the period piece I'd chosen, and as it turned out I was a bit disappointed myself, underscoring the loneliness I felt missing Michael.

I’d asked Calvin's nurse to stay a little late so I could grab a bite to eat after the movie. Pulling out of the theater parking lot I felt kind of lost. So I drove around a bit before deciding to hit my friend’s new lounge back by the fire station. As I’d hoped, my buddy Bob was tending bar. It was early, so the place was awkwardly quiet, mostly empty save a casual middle-aged couple at the end of the bar drinking spirits and a woman eating dinner by herself. I was feeling a bit down, wasn’t sure if I wanted to stay.

“Got any music?” I piped. Bob asked me if I’d like some jazz. I nodded. He put on Nina Simone which reminded me of good times back in my San Francisco flat. Doug, my upstairs neighbor, played her a lot—I marveled at her unusual, sad, almost masculine, voice.

Soon I was sipping from a stream of buttery Malbec amply filled past the fat part of my glass. Then Bob delivered a sublime Caesar salad, anchovies, a basket of bread and olive oil, pepper and sea salt in tiny shallow bowls. There wasn’t much to do but eat, drink and stare at the bottles of liquor against the wall, my friend Bob having to leave the bar every few minutes to retrieve things from downstairs. In between trips he entertained me with funny stories about his stubborn twenty-two-month-old daughter.

At the end of the bar the woman was trying to solve a puzzle that her partner had outlined on a napkin. The two burst out laughing and I flashed them a smile. “What’s the challenge?” I asked. “To connect all nine dots using only four straight continuous lines,” the couple replied in unison. I jumped off my stool to go see what they meant, to study the napkin with its nine dots creating a square-shaped grid. Immediately I chirped, “it’s got to be something where the lines go beyond the dots.” He found my quick answer amusing and showed us the solution. Indeed, two of the line segments must extend outside the implied box of dots. “It’s where they got the term ‘thinking outside the box,’” he said, to which I quipped, “I usually think outside the box, which is why I never keep work with certain corporations.” We all had a very hearty chuckle.

At a quarter to seven Bob brought me the bill just as I was scrawling in pen on another napkin:

“When you have exhausted all possibilities, remember this—you haven’t.”

I fingered the napkin across the bar to my newfound companions, “You gave me something so here’s something for you.” I shoved one arm, then the other, into my coat as they read it. We all three smiled with our little buzzes and wished each other a very good night. I folded the dotted napkin and stuffed it into my pocket. As I descended the stairs I thought, with a kid like Calvin, it's a good thing I can think outside the box. My Calvin, he's a puzzle, his seizure disorder, a maze, a constant problem to solve, like trying to put a square peg into a round hole ... but there's probably some way to do that too. And if there is, you can be sure I'll figure out how.

In honor of epilepsy awareness month, please share this story with others. Help bring us one step closer to a cure. 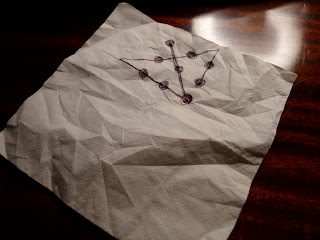