Mark Twain’s youngest daughter, Jean Clemens, suffered from epilepsy. At the time there was no drug therapy for the disorder and thus its victims were subject to progressively frequent and worsening spells, because seizures, if left unattended, burn out of control like a wildfire devours dry brush. Jean died at the age of 29 when she drowned in the bathtub while having a seizure.

One year ago Calvin was taking only one anticonvulsant drug in the continuing effort to smother his seizures. He was having two or three grand mal seizures a month, far better than the dozen or two he was suffering the year before. Nevertheless, the wicked fits kept setting sparks, finding ways to wreak havoc and burn uncontrolled in our son’s brain, with ever increasing visits.

Some people who have epilepsy experience a honeymoon period when they try a new drug and can experience a few weeks or months of seizure freedom, but at some point the honeymoon is over, and the seizures return, often worse than before. The natural instinct is to continue to increase the drug(s) in hopes of stomping out the seizures once and for all. And while that may work for a while, the insidious fits often appear again like a vicious rash, a firestorm.

The only hope for those who suffer from epilepsy—for their families—to live some semblance of a normal life, one without the promise of looming seizures, repeated trips to the hospital, developmental delays, an entire lifetime of drugs and their heinous side effects and the constant fear of death, is a cure. Right now there isn't one, and most of epilepsy's meager resources go toward researching treatments instead of researching a cure.

So our little Calvin who, before the seizures, had it pretty rough to begin with, is stuck living a life inconceivable to most, while we must pump him full of drugs, only to sit by helplessly and watch while he continues to suffer seizures anyway.

In honor of epilepsy awareness month please share this story with others. Help bring us one step closer to a cure. 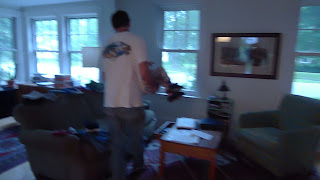 Posted by Christy Shake at 1:01 PM