I wish I’d had a conversation about the universe with my dad, but that wasn’t the kind of relationship we had. Our connection was rooted in the physical, in the doing not in the saying. My dad had that same kind of link with the natural world—didn’t much talk about the beauty in things, didn’t call out the colors of a fiery sunset or the way the dew sparkled on a downy rhododendron bud, though I know he enjoyed these things. Instead, he’d gaze out at the world with a look not unlike a smile simply soaking up the moment.

Ours was a relationship of few words. My dad revealed the majesty of a thing—a moment—but not by underscoring its mystery with vocabulary. Instead, he showed beauty to me in simple things like choosing the perfect green sapling to whittle into a spear and the art of sculpting a lump of sticky dough around its end and how to roast it over an open flame to a perfect golden crisp. He showed me charm in the melting of a cold pat of butter into its baked center watching it pool, steam rising from its moist center. And together we'd enjoy the splendor of its flavor, as much from its aroma and texture as from anything, with a simple, smiling "mmmmmmm." Then we’d huddle together, the campfire warming our faces, close, hot denim singeing our knees, perhaps charring a sneaker toe in the flames. We'd poke sticks into the embers coaxing sparks that, like fireflies, spiraled into the blackness before disappearing. The cold night hugged us tightly, as if we were a glowing capsule in the center of space—of the universe—which of course we were, and I'd sit there hoping that moment under my dad's heavy arm would last forever.

But I really don't think my dad was much for prayer. And knowing him, I doubt he believed in Christianity with all of its scriptural talk of angels, devils, sin, heaven, hell and a Man upstairs answering supplications—or not. Dad was more of a pragmatic kind of guy, down to earth, and I'm pretty sure he figured that, after a good go at life, he'd simply die and become part of it—the universe—and that'd be it. I imagine it sounded just fine to him to join with the stuff of life—the dirt, the carbon, the oxygen, the nitrogen—earthworms churning it all up into rich soil nurturing some plant or tree that a child might one day prune and sharpen into a skewer to roast marshmallows or hot dogs.

I think about our relationship and how similar it was, in some ways, to the one I have with Calvin. It's reflected in the way he and I are so physical, the way we tickle, hug and kiss, cuddle and hold hands and in the way we don't really have conversations—can't because of Calvin’s speechlessness. It's mirrored in the way we hang out in the backyard caressing the grass and the rough bark of trees, enjoying bird songs and wind in our faces, in the way I show him blooming flowers that I hold under his nose to smell. My boy seems attentive to these things—when so may other things elude his interest—in a way I can't explain but by the passing down of genes, of my dad's gift to me that I in turn gave to Calvin, and it makes me happy.

A few summers ago on the sidewalk outside our favorite coffee shop we met an unusual music man plucking away sourly on his guitar and singing an off-key, nasally tune. We got to talking with him on occasion, whenever we saw him sitting there in his electric cart. He told us of the accident he'd had while drunk driving with his best friend when they were teenagers, how he was thrown from the car and hit a post or tree, about how his friend had died. The man had suffered a terrible head injury, went into a coma, begun having seizures and eventually had to relearn everything as if he were an infant, how to walk, how to talk.

We take Calvin with us to that cafe and guide him through the cozy joint between round tables and errant chairs, past the sharp knees and elbows of coffee buzzed patrons, some with laptops, others sketching or reading. From an inside corner couch the music man eyes Calvin and tells me, in a slurred mumble nearly imperceptible, that all Calvin has to do is to believe—in God and in himself—and he will heal. This is when I politely disengage. I smile and nod and lead Calvin back to the couch where Michael sits with his hot coffee munching a toasted bagel. As we stumble away I consider whether Calvin is capable of having any kind of belief system. What I am sure of is that he—like my dad was—is rooted in the here and now, in the love of the physical world and that which is in front of him, unaware of what might be coming around the next corner or what the next moment might promise. But whatever it is, it’s enough for him not to have to believe, but rather simply to exist, to love and be loved.

I often hear myself say to my boy, "you know I love you, don't you kid?" just like my dad used to say to me. Sometimes he giggles, though I can never be sure if he understands me or just likes me whispering in his ear. No matter, I smile and close my eyes to dream of Calvin and Dad walking hand in hand through a damp mossy old-growth forest where the forget-me-nots bloom in a delicate blanket of cornflower blue and white. Dad's ashes are resting there now under a canopy of blue, green and gold—or sparkling blackness—that one day, perhaps, I can gaze out at in splendor with Calvin and not have to believe in anything but that moment we share in the universe.

In honor of epilepsy awareness month and the three million Americans who suffer from it, please share Calvin's story. Help bring us one step closer to a cure. 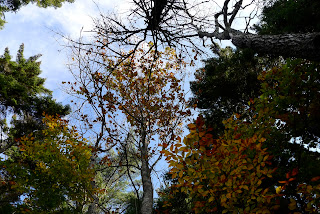