The thing I remember most about Amanda’s epilepsy diagnosis is stepping outside the hospital doors one blue-skied summer day, looking up at the clouds, and saying “Thank you, God” for only being epilepsy. After all, people live long lives with that disease. Medication stops the seizures. She will be able to resume her normal life. People do not die from epilepsy…

Amanda’s seizures had not gotten too bad at that point. They were still only absence seizures—small, fast—and had not interfered with her life much yet. Some, but life was still fairly normal. I had spent half the night in Amanda’s hospital room for testing and half the night in the cafeteria with a mother who told me about her son’s battle with leukemia and his devastating prognosis. I felt lucky that day. I felt that it was just a blip on the radar screen of her life. After all, children are supposed to outgrow, adjust, and plow through. Children are supposed to be resilient.

Soon, I found myself saying over and over again to Amanda’s many neurologists, “People do not walk around in this state.” Absence seizures began in her ninth year of life, drop seizures and myoclonic jerks began somewhere between 11 and 12, and by 13 tonic clonics had completed the picture. At first she had 50 per day. By the age of 14, her brain had some kind of seizure every 30 to 60 seconds—all day, all night, holidays, weekends. Never a day went by that would give her a break. “If only for a day,” I used to say.

We tried every drug, every diet, every test, every website, every renowned hospital, and every top-ranking doctor. Nothing worked. Nothing helped longer than a month or so. Seizures are relentless—they invade and attack and you cannot stop them or negotiate with them. You cannot pay them to leave or press a button for their demise. You can only watch in horror and sleep with one eye open, constantly checking for that next breath you hope your child takes.

You do not get the luxury of being able to explain the epilepsy afflicting your child because even the neurologists have little explanation for what is happening. Instead you are left with little information and a plethora of loved ones who believe and try to quell your feelings of incompetence as you try every day to battle an unknown demon laying claim to your child.

Epilepsy robbed Amanda of her ability to walk, eat, dance, run, sing, be a cheerleader, play with her faithful companion Snoopy, keep up with her friends, or date a boy. Yet every day she awoke with a beautiful smile that lit up even a room filled with medical equipment and sadness. She never gave up hope that the seizures would release her one day, that she would go back to the life that was robbed from her and assume her place in it once again. She helped me believe it even on my darkest days.

Four weeks before her 16th birthday, Amanda told the student-nurse that I hired to help care for her that God told her he was going to stop her seizures for her birthday so she could dance. She was precise and matter of fact. Funny, the doctors do not tell you that your child could die. They do not even tell you that when your child is seizing over a thousand times a day with no end in sight. They simply say, “We do not know.” They did not know that the seizures would interfere with her brain’s ability to regulate her heart rate, oxygen levels, and body temperature. They did not know these things would happen or even if they could happen. They just knew that they had run out of things to try.

On July 19th, 2007 I pushed a curl off Amanda’s forehead, wiped a bead of sweat from her lips, and kissed them with all the love I had for the last time as she took her last breath in this world and passed into the next, the seizures finally leaving and letting her get that peace, “if only for a day.” My brown-eyed, brown-haired dancer, singer, comedian, and animal lover with a smile that lit up the room was buried on July 23rd, one day before her 16th birthday.

We need to work so that we may understand the brain as much as we do the heart and all of the other organs that make us the human beings we are. The brain is the final frontier that we can and will conquer. With your help, we can find a cure.

Please share this story and help bring us one step closer to a cure for epilepsy. 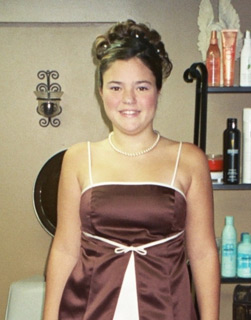